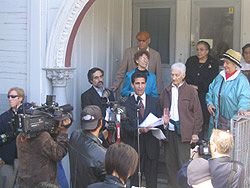 After striking down Supervisor Aaron Peskin’s legislation increasing Ellis Act relocation payments, San Francisco Superior Court Judge James Warren has denied the landlord’s motion to lift the stay on the order pending appeal. This means that landlords must continue making payments in accordance with the ordinance until the Court of Appeal can review Warren’s ruling next year. Since Warren’s ruling found the ordinance facially invalid without applying the proper legal standard, the prospects are better than usual for a Court of Appeal reversal.

On June 27, 2005, Judge Warren denied landlord efforts to immediately suspend the new city law increasing tenant relocation payments under the Ellis Act. Sponsored by Supervisor Peskin, the law was thrown out by Warren on the grounds that it “imposes a prohibited price on the right to exercise the Ellis Act.”

According to the judge’s reasoning, relocation payments of any amount are illegal because they have the potential of preventing landlords from exercising statutory rights. Although the Court of Appeal upheld Ellis relocation payments in 1992, a change in state law sponsored by Assembly member Leno in 2003 broadened the beneficiaries beyond low-income tenants. Judge Warren had to engage in reasoning that was bizarre even by his standards to find that an expansion of the beneficiaries automatically means that landlords cannot afford to pay.

Significantly, the landlord in the case (Pieri v CCSF) introduced no evidence that they could not afford the relocation payments. But Warren was not deterred by this, concluding that the statute’s failure to address the capacity of the landlord to pay per se invalidates it.

Simply put, if Bill Gates invoked the Ellis Act, Warren would find that he cannot be required to make relocation payments because the statute fails to address the landlord’s potential incapacity to pay.

Logic like this means that we have reached uncharted territory in San Francisco: for the first time in decades, the Republican-dominated US Supreme Court is far more liberal on property rights issues than our local judiciary.

There are two ways to challenge the validity of a law: “facially” and “as applied.” Warren’s objections to the Ellis relocation law clearly go to the latter, as individual landlords who are unable to afford such payments—assuming any buyer of property in San Francisco is in such a position-could successfully sue to avoid having the law apply to them.

But Warren found the relocation measure facially invalid, meaning that it could not be valid as applied against anyone. He found this facial invalidity despite conceding that the Leno amendment to the Ellis Act expressly supported the city’s position regarding the law’s validity.

With all the attorneys in San Francisco, there must be someone who can raise the money to take on Warren and other judges whose political biases against tenants are so strong that they lack the impartiality necessary for adjudicating landlord-tenant issues.