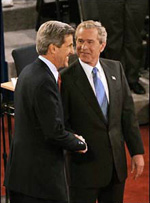 Kerry the Liberal, the Guardian Slights Tenants, and Some Facts about District Elections

At Friday night’s debate, George Bush twice described John Kerry as a “liberal.” This should not be surprising, since Republicans love attacking “Massachusetts Democrats” as being too “liberal” America. But the Bush campaign has chosen to wage the 2004 race not on ideology but on “character.” This strategy may demonstrate a bipartisan recognition that most Americans prefer a candidate who promotes civil liberties, the environment, abortion rights, expanded health care, new jobs programs, and progressive tax policies over the agenda promoted by Bush.

A new John Kerry has emerged. In the place of an aloof, often boring candidate is a nominee who is aggressively promoting what once was described as a “liberal” agenda.

How could someone possibly be elected President in 2004 who, as Bush noted Friday night, has the “most liberal voting record in the Senate”? The Democrats have not won with a liberal nominee in forty years, and have been so afraid of being attacked as “liberal” that their only two winners since 1976-Carter and Clinton-campaigned against their Party’s progressive wing.

Why is Kerry running to the left and why has the Bush campaign failed to target Kerry’s liberalism? The latter has two explanations.

The first is that Karl Rove and company were so confident over the “flip-flop” and “weak on terrorism” lines of attack that they did not want to dilute this message. The Bush campaign relentlessly focuses on a single message, and the “Kerry is too liberal” theme was not the chosen one.

The other possible, and more likely, explanation is that Bush’s own polling showed that voters agreed with Kerry on the issues. Bush has thus followed Michael Dukakis’ strategy of defining the race as more “about competence, not ideology.”

Bush’s failure to demonize Kerry as “too liberal” has given the Democratic nominee broad leeway to become more anti-war and more progressive in his approach to domestic issues. This is turn has helped Kerry to solidify his base, which is the main reason he has jumped in the polls since the first debate.

The Democratic Party’s activist base has long contended that a more progressive, populist approach was critical to winning presidential elections. But the Party’s more conservative/moderate elements argue that George McGovern’s populist effort won but a single state, and that a liberal cannot win the Presidency.

This explains why we have seen news stories almost every presidential election year about how the Democrats have to be careful not to wade too far left. This is the first time I can recall not seeing such articles, giving the Kerry-Edwards ticket the freedom to take the positions they need to win.

Who would have thought at the start of 2004 that America could elect the most progressive President since Lyndon Johnson in 1964? This result would prove that Howard Dean was on to something, and that while he was the wrong messenger, he had the right message.

The problem is not their endorsement of McGoldrick, who is more progressive than Lillian Sing. Rather it is the weekly’s failure to even acknowledge the incumbent’s critical anti-tenant votes during the past two years.

In 2003, McGoldrick cast the critical vote preventing the city’s voters from deciding whether to have the Rent Board Commissioners elected rather than appointed by the Mayor. At the time he told the San Francisco Tenants Union that while he could not support an elected Board, he could support another method of Rent Board reform.

In 2004, the Tenants Union and tenant activists from throughout the city sought McGoldrick’s support for a charter amendment that would change the way Rent Board commissioners were appointed. McGoldrick had strongly supported a similar change for the Planning Commission and Board of Appeals, and tenants thought it only logical that the Board and Mayor should also share Rent Board appointments.

At public hearings on the Rent Board reform proposals, tenants spoke unanimously in favor while landlords opposed any change. Why would they, given that their strong ally sits in the mayor’s office.

All the Tenants Union and activists were asking is for McGoldrick to agree to let the voters decide on reforming the Rent Board. This was the Tenants Union’s top priority for 2004, and when push came to shove, McGoldrick again sided with the landlord lobby.

The Guardian’s endorsement of McGoldrick makes no mention at all of his bad vote on this critical issue. This could reflect the weekly’s ignorance of widespread tenant anger at the pro-landlord Rent Board, or it could mean that they did not want to say anything that could cost McGoldrick votes.

But in their endorsement of Tom Ammiano, the Guardian does not refrain from reminding readers that the incumbent supported an “overly weak public power plan.” They saw that issue as too important to be swept under the rug.

By giving McGoldrick a free pass on his anti-tenant vote, the Guardian sends the message that tenant issues, and rent board reform specifically, are simply not that important. This only makes it easier for McGoldrick and other candidates to continue talking tenant while voting with landlords.

Some Facts About District Elections— My column last week on the failure of district elections drew strong response. A broader discussion of this issue will be deferred until after the elections, but consider this.

The ability of progressive candidates to win citywide elections cannot be evaluated by looking at the electoral success of politicians who ran as incumbents after being appointed to seats by Mayor Brown. In other words, the ability of Michael Yaki and Amos Brown to win citywide races does not mean that either would have come near to winning had they not run as incumbents.

Many activists see city politics through the lens of the Brown years, but that period was distorted by his making a record five appointments.

A clearer test would be the results in citywide races in a field of non-incumbents. From 1990 until the field got screwed up by Brown appointing five members, progressive candidates did far better than conservatives in citywide supervisors races.

If voters this fall had the opportunity to elect Feldstein, Haaland , Mirkarimi, Peskin, Sandoval and Saucedo(Ammiano would be barred by term limits), progressives would end up with better results than will otherwise occur.