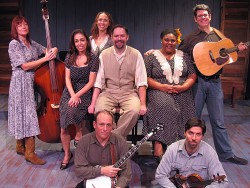 This rousing musical is still one of the most produced musicals in the USA because Harry Chapin’s score grabs you by the seat of your pants and won’t let go.

How does the Gospel translate to the 21st Century? Quite well. It brings up many questions during the musical. The one that really resonates is – would people recognize Jesus if he showed up in Georgia? Not likely.

The s—t kickin’ music starts with a fantastic “Somethin’s Brewin’ in Gainesville.” Then there is great harmony in “I Did It”. The song “Jubilation” brings up memories of hair – but without the Broadway glitz. There are promises that if you follow the gospel you’ll get “A Gold AmexCard”.

Herod in this play is the Governor of Georgia. It’s such a camp – but so-so true. Absolutely loved “Dangerous Man”. Think Sweeney Todd.

These electronic evangelists of the airwaves will keep your toes a tapping. Well, gee gosh – you might even be tempted to go up on the stage and get saved. This is one of my favorite lines: A preacher questions why Jesus is preaching and drawing such big crowds. He complains: “Why would he do it for nothing?” And, of course, that nails the Churches to the cross and their constant asking for ‘small change!” What the heck – biz is biz. You just can’t compete with the Free Jesus out in front of your Church.

What you’ll see and hear at the Custom Made Theatre production is an evening of talent that matches Broadway performances. It’s Chair Rockin’ Baby. And as one sings: “If you’ve got a problem – you must flush it out!” Yes you do, and yes they did.

Oh, and get this: Pontius Pilate (Preacher) is complaining that Jesus is operating without a permit to run a fast-food-joint. He says in his imperial way “He’s serving 5,000 people a day, without a permit.” He’s such a nice guy. But, kind-a-dumb, wouldn’t you say?

EXTRAS: THE STORYTELLER – EDWARD HIGHTOWER is a DYNAMO. He has spirit that absolutely soars. ALL HAIL A NEW ELECTRIFYING STAR.

The Cotton Pickers: Pamela Brandon – bass. John Croizat/David Finch – fiddle/mandolin. Jeff (Uncle Jake) Kaplan — banjo/guitar. And Matt Lauer, also on guitar. They bring out the timeless music (Bluegrass) with every nuance and every crazy note with precision not often heard. “The pickers are spell-binding!”

DIRECTOR: Marilyn Langbehn has given us an inventive fresh new take on the musical.

Musical Director Rona Siddiqui worked magic. The set/scenic design by Lewis Campbell is crisp and powerful. The lighting designer Kedar Lawrence has kept the mood going with fascinating and evocative plays of light and shadow.

“The show is a triumph!”

The 42nd Moon production of Jubilee is really something to celebrate. The impeccable ensemble lands every laugh with perfect timing. Dyan McBride (Eva Standing) is truly one of the most fun performances that I have seen in a long time. She match’s brittleness with heart and showy gestures of faux affection.

Back in time: Cole Porter and Moss Hart took a long luxury cruise to tour the world. They wrote this musical during the cruise. They used inside jokes about their famous friends; there is Johnny Weissmuller, Elsa Maxwell, Ginger Rogers, playwrights, a King, Queen, Princess and the Prince.

The Princess is wooed by playwright/composer/actor Eric Dare. A hostile uprising forces the Royal family to abandon the palace. They romped around with commoners, and loved the freedoms of being on their own.

The musical opened on Broadway at the Imperial Theatre and ran for 169 performances. Here are some of the great/clever songs: “The Kling-Kling Bird on the Divi-Divi Tree”, “My Most Intimate Friend”, “A Picture of Me Without You”, “Begin The Beguine”, “Just One Of Those Things”, and “Everybodee Who’s Anybodee.”

This is a warm, funny and tender musical. It’s a very special evening. A perfect mix of Royalty, humor and commoners make the Cole Porter musical wildly enjoyable!

C.J. Blankenship (Mowgli) is the icing on the cake. He reveals almost all to the audience (sexy outfit) – and his voice is strong, vibrant. He makes a strong, assertive and sexy statement.

Megan Cavanagh (The Queen) – couldn’t be more stately. I was almost convinced that it was Queen Elizabeth. Benjamin Pither is always a delight. He plays Prince Ruldolph, among several other characters. In fact he changed clothes so often that he must have been naked back stage most of the time as he slipped into one character after another in seconds. Zack Thomas Wilde (Eric Dare) was born to play the snob Playwright. Andrew Willlis-Woodward (Prince James) reminds of Ashton Kutcher in looks. He has that cinematic charm. It’s hard to not focus on him. But, then he is a Prince.

The spectacular Direction is by Greg MacKelllan. Dave Dobrusky, Musical Director is always the genius at the piano. And brilliant Choreographer Tom Segal is mind-blowingly fantastic. The Costumes by Louise Jamilowicz are just fabulous. Every scene looks like it jumped right off the cover of the Saturday Evening Post. Visually stunning!

Patty Duke in “Wicked” at the Orpheum Theatre will star in the Reaf Benefit on Dec. 7, 2009. Photo: Joan Marcus.

REAF PRESENTS A SPECIAL AT THE J’LaCHIC THEATRE 39

The One Night Event stars the terrific and fun Patty Duke is a star from the successful and wonderful “Wicked” at the Orpheum. Also you will love Lucie Arnaz, Broadway star and singer. Ron Abel will accompany Arnaz.

Then there is the American idol Star RJ Helton – he will make your socks roll up and down. Connie Champagne & Leanne Borghesi – Cabaret Stars will certain keep you guessing. You never know what they are up to. But whatever it is – is bound too be fun.

Another ‘Wicked’ star, Teal Wicks will also perform. And the wonderful Motown Singers Top Shelf. will bring down the walls. Well, not literally, I might be sitting next to one of them. But they will keep your toes tapping.

All the entertainers will ring in the Holidays with upbeat, high-energy music, dance and comedy. The One Night Only Cabaret raises funds to provide to direct them to services that help people with HIV/AIDS. To date, REAF has distributed over $2.25 million.