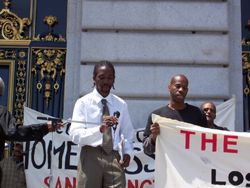 Homeless folks forgotten by the lies of Care Not Cash Speak truth to power!

“2002 was a rough year when then supervisor Newsom, and Department of Human Services director Trent Rohr pumped over a million dollars into their plan; Care Not Cash – we know now that if there was truth in advertising that plan would have been called cots not cash.” San Francisco Supervisor Chris Daly shouted over the crowd of hundreds of”forgotten people” gathered at a rally organized by The Coalition on Homelessness on the SF City Hall steps Tuesday, “We now know since the implementation of Care Not Cash there are hundreds of San Franciscans staying in cots and receiving 59.00 a month. Yes its good thing that they got some folks housed but it is not ok that they got them housed by putting more people in cots.”

We stood together; homeless elders, single adults, disabled and day laborers other wise known as The Forgotten People- forgotten by the media pumped, Newsom-funded program, Care Not Cash. Forgotten, like I have outlined many times before in pieces for PNN over the last two years since Care Not Cash was proposed by Newsom or as Chris Daly said, funded by Newsom and his boys in Corporate media land. Bought and paid for to get Newsom elected Mayor on the backs of the poor.

“You know that money that you take from my check each month, could you buy me a blanket” Shelly Roder from St Boniface Shelter followed Daly with an antecdote about one of her clients in St Boniface, who, trying to survive on Care not Cash, can’t even afford a blanket. She went on with an impassioned plea to get justice for the hundred of folks in the Citys’ shelter system who have no voice since the implementation of Care Not Cash “We have people in our shelter who have been there for 12 months, we want justice for them, we also want justice for the rest of them who have no benefits, we also want justice for all the people who are totally left out of the all programs now”

” I am here as a member of the faith community, Glenda Hope with Network Ministries addressed the crowd next “but I am not speaking as a minister now, I am speaking as a senior citizen, at 67 years old I can’t imagine going through what homeless elders are going through right now just to get a bed and survive under the mythical program, Care Not Cash”

” I want to read you all a poem I call “Care Not Cash SlashTrash” a young African Descendent volunteer for Coalition on Homelessness summed up the days’ action with his incisive poem which attempted to outline the position of those of us ( like many writers for PoorNewsNetwork) who have tried to live on $59.00 a month. “Will being dopeless result in a promised bed – will your non-medical coverage cover my arm that bled*A week goes by* a referral sent – a wait list of others increased- a tiny portion is housed*