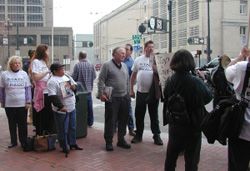 On Friday afternoon February 4, after a demonstration of injured workers took place at the giant California State Compensation Fund, a quasi-public group multi-billion dollar insurance corporation that controls more the half of California’s workers’ comp market. Dianne Oki, president of the fund resigned only hours after the injured workers protest.

Her resignation came not only as she faced a disabled workers’ protest in front of her offices but after specific questioning about the case of Larry Nign (www.mystatefraudstory.com/index.aspx) and the role of her agency in a reported criminal cover-up by her agency. While virtually the entire corporate controlled media has ignored this story, it is building up as an explosive danger to both the governor and the politicians who were responsible for the workers’ comp deregulation bill.

The Friday began with a film showing of “Almost Broken”
(www.almostbroken.com) about the 13 year battle of injured worker Larry Nign to get justice. Los Angeles film maker and IATSE Local 33 member Christine Peitz had the premiere screening in San Francisco at the Main Public Library which is also only blocks away from the California State Fund offices. Peitz herself was injured at Disney in Los Angeles and had
became angered and frustrated with a system that was preventing her from getting proper care and running up against the “deregulated” insurance industry. Her riveting film tells the story of how injured worker Larry Nign was denied benefits and judges, lawyers and the State Fund investigators conspired to deny him his healthcare benefits and compensation. It recounts the long, excruciating and lonely struggle that Larry Nign and his family faced as an injured worker. This story according to Nign and Peitz is now being repeated by tens of thousands
of workers throughout the state who are reaching a brick wall in getting their benefits and injuries covered.

Also revealed by workers at the screening, was the growing injured worker crisis at State Fund itself. As a result of cutbacks and a massive increase in injured workers cases, more and more State Fund employees are now being forced out on disability and are met with the same problems as those outside the system.

Following the film screening, the disabled and injured workers marched over to the State Fund offices. Chanting “Stop the Cover-up”, and “No More Corruption At State Fund”, the protesters were met by San Francisco police who had been called to protect the State Fund bosses from disabled workers. Injured firemen, healthcare workers and others took the bull horn to talk about their battles against the insurance companies to get their injuries covered.

From inside the building on the first floor President Dianne Oki and several top executives watched and giggled as the demonstration and rally continued. One of the newspaper reporters entered the building for an interview and was accused of “being a protester”. When he told them he was a reporter, they knew they had real problems.

As the demonstrators demanded on the bullhorn that Oki and the executives come out a face the people, they panicked and rushed out of the lobby. They had previously issued a memorandum to all State Fund employees that there was no reason to panic but that injured workers would picketing in what they hoped would be a “peaceful” demonstrations. Governor Schwarzenegger had also been invited by film maker Christine
Peitz to view the film and later the same afternoon she received a call to her home from the governor’s office that he was unable to attend to the scheduling difficulties.

In fact injured worker Larry Nign and Christine Peitz had both made numerous requests for the governor to investigate the problems and conflicts of interest at the State Fund.

It Wasn’t Supposed To Happen?

None of this, of course was supposed to take place under the new state bill SB 899 that has been lauded by the governor and voted on almost unanimously by the state legislature as the solution to the workers’ comp crisis. Most of the legislators admitted that they had not even read the bill and much like the electrical deregulation bill, this was passed in a rush at midnight without proper hearings. This scheme like the deregulation of electricity by the state was supposed to “solve the problems”. It was also unopposed by Secretary Treasurer Art Pulaski and
California Federation of Labor. The deregulation of the industry has legitimized the ability of the insurance companies to deny real disability claims and face no punishment for their actions.

The deregulation of the workers_ comp industry has also enticed
investors and Governor Schwarzenegger’s billionaire friends and
contributors like Warren Buffet to re-enter the workers_ comp insurance market. It is also creating havoc for injured workers , doctors and caregivers throughout California who are stuck in a collapsing disability system.

Injured workers who need pain medication, treatment and immediate surgery have been put on hold and in some cases some workers have even committed suicide. Workers who were injured even prior to the passage of SB899 and were told by their insurance companies that they would be covered by medical care for life in lieu of a large cash settlement are now being denied care and medical coverage.

Many of the injured workers are so caught up in the efforts to deal with their injuries and take care of themselves and their families that this is now adding to their medical problems. They are in a state of shell shock as they seek to deal with a collapsing system supposedly organized to protect them when they are injured on the job.

An important reason for the failure to investigate the criminal cover-up by lawyers, investigators and even judges is the funding of district attorney’s offices in California. District attorney’s offices throughout the state receive millions of dollars from the insurance companies to investigate fraud in the workers’ comp system. Most of the money however is directed toward operating costs of these departments and not toward
the small amount of worker fraud. District attorney’s as recounted in the film “Almost Broken” in fact are fearful of investigating the very state agency that is providing them with funding for their operations. District Attorney offices in most cases have also refused to investigate and file criminal charges against employers who have conspired to prevent their workers from getting healthcare coverage when injured on the job. Forms have been illegally changed and destroyed but the DA’s
have refused to take action.

Also joining in the demonstration was a newly formed committee called the California Coalition For Workers Memorial Day (www.workersmemorialday.com) CCWMD. The coalition is organizing for a statewide protest on April 28, 2005 at the State Capital of injured and disabled workers from throughout California. They hope to get many union locals in California to get busses for their injured and disabled workers so they can participate in the event.

At the same time that the Coalition is protesting the attacks on
disabled workers, they are also calling for the establishment of a
“single payer” health care system that would cover all people regardless of whether workers are injured at work or at home. At present, the healthcare system is an employment based system that requires a job for coverage.

The establishment of single payer would provide for medical coverage for injured workers and give them the right to directly sue the employer for their injuries.

This of course would not only eliminate the insurance industry from healthcare for injured workers but would make employers directly liable for the health and safety violations on their job sites.

As the escalating problems of the Workers’ Comp system build, the danger for both the insurance companies and employers could reach a boiling point and the resignation of Oki could be only the beginning of what is coming down the road. Larry Nign with the establishment of his web page has been able to get the information out despite the media blockade of the story. The LA Times and other broadcasting companies have refused to
cover this growing scandal despite the effort of Nign and others to provide all documentation and evidence. His web site is now being hit by many government law enforcement agencies as well as the State Fund agency.

This issue will also be covered in a newly established TV show called “Injured Workers On The Job” www.injuredonthejob.tv produced by Sam Gold.

Gold also is the Executive Director of the California Injured Workers Coalition www.injuredworkerscoalition.com. He is an injured sheetmetal worker of San Francisco Sheetmetal Workers Local 104 and established the show to expose the increasing assaults on the state’s injured workers. It is programmed on cable stations around the state and is also streamed on the web.

It is clear that this crisis will only deepen and the injured and
disabled rights activists are now successfully making their own media to get this story out.