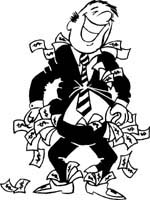 On January 10, the Supreme Court in Citizens United v. Federal Election Commission invalidated the Bipartisan Campaign Reform Act of 2002, a federal law which prohibits corporations and unions from using their general treasury funds to make independent expenditures for speech that is an “electioneering communication” or for speech that expressly advocates the election or defeat of a candidate. (2 U.S.C. §441b).

The Supreme Court ruled that the “government may not suppress political speech on the basis of the speaker’s corporate identity.” According to the Supreme Court, its ruling is a logical extension of a long line of decisions affording First Amendment rights to corporations, but is clearly a set back for campaign finance law.

The corporate personhood legal concept has been codified: “In determining the meaning of any Act of Congress, unless the context indicates otherwise — the words “person” and “whoever” include corporations, companies, associations, firms, partnerships, societies, and joint stock companies, as well as individuals.” (1 U.S.C. §1)

How did a corporation become a natural person? Initially, the privilege of incorporation was granted selectively to enable activities that benefited the public, such as construction of roads or canals. Corporate status enabled shareholders to profit and gave limited liability to directors, officers, and shareholders for the corporation’s debts and obligations. For over 100 years after the American Revolution, legislators maintained tight control over corporate chartering.

Then came the controversial 1886 Supreme Court decision in Santa Clara County v. Southern Pacific Railroad. Although the Supreme Court supposedly did not make a direct ruling on the question of “corporate personhood,” the misleading notes of a clerk finding corporate personhood were incorporated in the Court’s decision. Whether this is myth or reality doesn’t matter at this point. The Supreme Court has often cited this case for the proposition that a corporation is a “natural person.” Thus, a precedent was set.

The Santa Clara case became the basis for a long line of court cases giving a corporation personhood. It is now firmly embedded in the law and neither the Supreme Court nor Congress is likely to overturn 123 years of precedent. The corporate personhood debate now centers on what subset of rights of natural persons should also be afforded to corporations. Proponents of corporate personhood have argued successfully over the years that corporations, as representatives of their shareholders, should have the same rights as natural persons, as for example, the First Amendment rights determined by the Supreme Court in Citizens United.

Imagine how different the economic and political landscape of the United States would be without the Santa Clara County decision and its progeny.