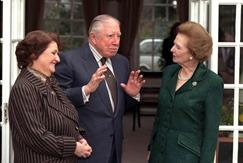 The corporate media has gone all out with reverence for the late Margaret Thatcher, reflecting a dramatic disconnection from progressive accounts and historical reality. President Obama even described her as “one of the great champions of freedom and liberty, ” despite Thatcher’s long defending and praising the brutal Chilean dictator Augusto Pinochet for “bringing democracy to Chile.” (Pinochet took power in a military coup that overthrew a democratically-elected government). This “champion of freedom” also called Nelson Mandela a “terrorist” and backed Cambodia’s murderous Khmer Rouge. But I think the mainstream media reveres Thatcher less for her embrace of dictators than for her “iron will” that led her to break the feisty miners’ unions. Corporate media owners despise unions, and, as with their praise for Ronald Reagan’s breaking of PATCO (the air traffic controllers union), see union busting as a courageous act. Wealthy media chieftains love Thatcher for eliminating working class jobs, cutting funding for free school milk programs, and dramatically increasing income inequality; they define such actions as strength rather than immorality.

Major political figures often get positive treatment in obituaries, but the corporate media praise for a woman whose life was dedicated to enriching the rich and making life worse for the poor has been something to behold. It’s as if a big curtain was pulled back to reveal what corporate media owners really think about how countries should be governed; while many fear being attacked as “reactionary” for backing extreme right-wing policies, they can promote such views by praising Thatcher.

David Corn’s must read piece for Mother Jones (“Bursting the Thatcher Bubble”) really sets the record straight. Among his many reminders of the real Margaret Thatcher is “how she cut school milk for elementary school children and won her first nickname, ‘Thatcher the milk snatcher.’”

But what’s really behind the media’s reverence for Thatcher is her zeal for union-busting. Her chief target was the National Union of Mineworkers, as Thatcher believed their power meant mining “had come to symbolise everything that was wrong with Britain.”

Union membership in Great Britain has fallen by 50% since Thatcher took office in 1979, and corporate media owners appreciate her role in this decline. They have had their own problems getting newspaper unions to accept layoffs, increased health premiums, and reduced pensions, and admire a leader who was able to force workers to accept lower living standards.

Thatcher was long praised for her “iron will.” Henry Kissinger (a fellow Pinochet admirer) was among them, praising Thatcher in a New York Times video for her “unwavering style as British prime minister defined leadership in a time of hesitation and indecision.”

But the corporate media sees it differently when political leaders exhibit an “iron will” and “unwavering style” on behalf of the poor and greater social justice. Their obituaries of the late Hugo Chavez typically referred to the three time democratically elected President of Venezuela as an “autocrat,” and attacked him for the same “unwavering style” for which Thatcher earns praise.

The deification of Baroness Thatcher insults her many victims. It reflects the media elite’s hopes that they too will be absolved of their sins against the poor by a similar erasure/revision of the historical record.