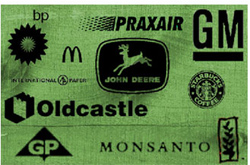 When New York Times columnist Thomas Friedman authored a April 15 Sunday Times Magazine front-page story urging America to become the world’s leader in all things Green, I knew that America’s “Green Revolution” had finally arrived. Last weekend’s Earth Day celebrations confirmed this, with an unprecedented number of businesses promoting a Green ethic. Not to throw acid rain on anyone’s parade, but a stated commitment to “green” should not become the sole criteria for evaluating social justice. For example, are “green” buildings better for the environment than not erecting a particular structure at all? Should we admire stores like Whole Foods, who combine a green ethic with the elimination of union jobs? And how do we connect America’s never-ending highway building boom, and its massive investment in environmental destroying military hardware, with support for “green” principles?

No newspaper columnist in the country speaks more with the authority of conventional corporate wisdom than the New York Times’ Thomas Friedman. A devout backer of unrestricted free trade, an until very recently a huge fan of the Iraq War, Friedman is now urging the United States to lead a Green Revolution in order to regain the moral authority and world leadership squandered during the Bush years.

At one level, longtime green activists should be cheered that Friedman is preaching such a message; it is good that a greater commitment to the environment is now a safe, “mainstream” cause.

But one can also see Friedman’s jumping on the Green bandwagon —three decades after many of the arguments in his recent article were made— as part of a corporate strategy to “market” an environmental ethic in a way that subordinates social and economic justice concerns.

In San Francisco, everyone seems to love “Green” buildings. Building “green” office and condo towers is the talk of urban America, as architects and developers have figured out a great way to make upscale, potential gentrifying structures into a “social good.”

There once was a time in the United States, and particularly in San Francisco in the 1980’s, where tall, view-blocking buildings were deemed to negatively impact the environment. Today, such towers are marketed as sleek, forward-thinking, “green” structures that boost, rather than diminish, the environment.

The “green” argument for building such towers is that infill housing prevents further suburban sprawl. But many of these luxury condos are simply second or third homes for rich people, who would not otherwise be moving to Tracy or East Contra Costa County, increasing traffic and tapping into the region’s water supply.

Considering the energy expended in building housing that is only seldom occupied, a truly “green” strategy would be to prevent the construction of such projects altogether.

Although California voters are correctly regarded as strongly pro-environment, the state continues to spend a disproportionate percentage of transit funding on building new highways. This is true even in the greater Bay Area, whose lack of public transit options—particularly on weekends and evenings—forces residents into cars.

The same business community patting itself on the back for being “green” consistently backs these new highways, and in San Francisco merchants are up in arms over plans for a Geary Bus Rapid Transit line. I cannot recall the last time a business group opposed a parking garage, and San Francisco’s allegedly “green” government approved a soon to be opened five-story garage at transit-heavy 8th and Mission Streets.

The federal government spends billions upon billions on new highways, and do not expect any Democrat, including Al Gore, who is elected President in 2008 to change this. There are simply too many jobs at stake in highway construction to be sidetracked by “green” principles.

Friedman’s article implicitly assumed that America can remain the nation’s leading producer of weapon systems while also exercising “moral leadership” on the environment. In other words, America can continue to invade countries in the name of democracy, create environmental nightmares through massive bombing, and yet be looked upon favorably across the world because we recycle and construct green buildings.

The rest of the world is not so easily fooled.

Clearly, a President who changes course on global warming, wins Senate support for a stronger version of the failed Kyoto accords, and creates a sense of mission about environmental preservation and protection will enhance America’s world image. The Apollo Alliance, a labor-environmental-community coalition focused on producing “green-collar” jobs through clean energy policies, already offers a strategy that could help the United States become a model for environmental change.

But even if all of the above occurs, this should not mean that social and economic justice should be obscured through the “fog” of greening.

For example, I received a press release last week where a group called Teens for Safe Cosmetics joined with Whole Foods Corp. to attacked corporate-produced, environmentally toxic cosmetics. Sounds like a good cause, but what about Whole Food’s strong opposition to unions, and its replacement of middle-class supermarket jobs with short-term jobs without equivalent health benefits?

When I was writing a book about Nike’s labor practices the company won plaudits for improving environmental conditions at its overseas factories. This was certainly good news, but workers continued to receive subsistence wages, no health benefits, and the company’s outrageous exploitation of those making its shoes did not change.

In order to avoid a mass epidemic of corporate “greenwashing,” activists need to increase their pressure on Corporate America and the nation’s political leadership. This means demanding an end to the country’s job dependence on highway construction and the military industrial complex, and insisting that human and labor rights are not subordinated while promoting everything “Green.”

The United States has a long way to go to earn the respect of the world for its environmental consciousness. And lowering the bar is not the answer.