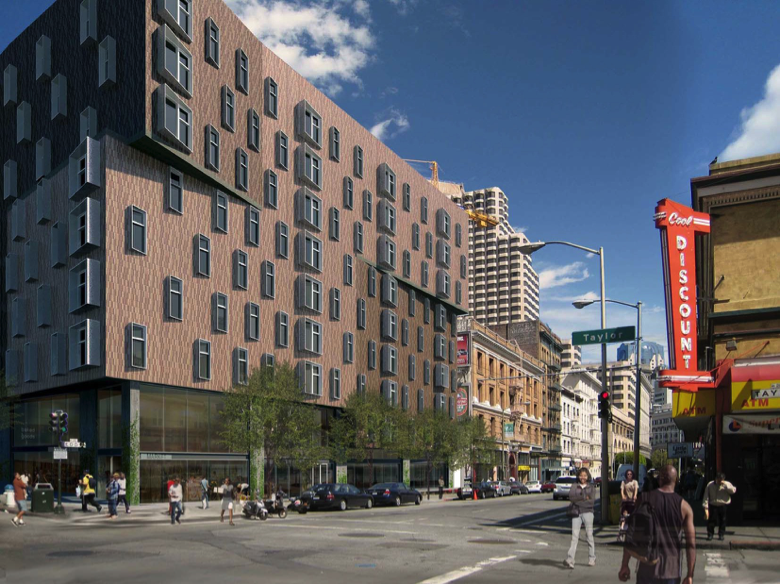 The coronavirus did not end the urban affordability crisis. To the contrary,  it is only a matter of time before urban America’s restaurants, bars, hotels and entertainment venues are filled and pre-pandemic housing demand returns. No major urban population drop is projected so that the acute jobs/housing imbalance will resume. More families than ever will need affordable homes

But the financing outlook for private development has changed. And this gives cities and affordable housing developers new opportunities that must be seized.

In Generation Priced Out: Who Gets to Live in the New Urban America I describe how nonprofit housing groups used the post dot com boom downturn from 2003-2012 to buy land in San Francisco’s Tenderloin neighborhood. This took key sites (like the Eddy/Taylor site pictured above) off the speculative market.  This helped preserve the community’s affordability when citywide rents and land prices skyrocketed with the post-2011 tech boom.

In contrast, no nonprofit in the city’s Mission District acquired a single site during that decade of opportunity. The city, backed by Mission activists, defunded Mission Housing, the leading Mission housing nonprofit, and did not redirect funds to another neighborhood builder. This resulted in a deluge of private developments proposed for the Mission starting in 2012, as for-profit developers had the neighborhood all to themselves. The the now dead “Monster in the Mission” at 16th and Mission was among the sites that private developers picked up when land was a lot cheaper but nonprofits were on the sidelines.

First, it creates opportunities for cities/nonprofit developers to purchase entitled projects at bargain prices. In response to the economic downturn many private developers will no longer be able to finance their projects. This is true even when local housing markets remain strong.

Is it fair that financing is not available when cities will have rebounded well before these housing developments are completed? I don’t think so but I’m not a lender. And they are not inclined to lend.

The 2008 national economic downturn stopped virtually every private housing development in its tracks. It made no difference whether the local housing market had avoided the foreclosure crisis that triggered the downturn.

Developers of entitled projects—i.e. developments already approved—have a choice. They can wait an indefinite period for lending to resume, all the while paying interest on their land. Or they can cash out by taking an offer from a nonprofit developer. Nonprofits have access to financing that private developers lack, particularly local housing bond funds and taxes specifically for housing. Nonprofits can also access state funding.

Many entitled projects in California and other states were already delayed due to rising construction costs. These developers may be particularly eager to cash out, giving nonprofits a great opportunity to take advantage of a favorable market.

Sellers of existing apartment buildings will have more trouble finding buyers who can finance purchases. This gives cities/nonprofit developers the opportunity to buy properties in neighborhoods where affordable housing rarely if ever gets built.

I have questioned nonprofits buying already rent-controlled buildings rather than adding to the affordable housing supply via new construction. It only makes sense if the buildings have a lot of vacant units; otherwise, investing to primarily “protect” rent-controlled tenants who are not at high risk is the wrong priority for scarce public funds.

Buying existing buildings should also be limited to neighborhoods lacking much affordable housing or whose zoning prevents building new apartments. In San Francisco, that means prioritizing North Beach, Noe Valley, the Richmond, Bernal Heights and similar neighborhoods. In Los Angeles it’s the Westside and in New York City SoHo, Park Slope and other neighborhoods where the future working and middle-class have been priced out.

The coronavirus has also reduced the price of some vacant land.

I write in my book how Denver’s Urban Land Conservancy uses “land banking” to secure strategic sites. They take advantage of a good price while awaiting funding for future development. I realize that the extreme affordability crisis demands building affordable projects now. But had land banking been commonly used in high-housing cost cities starting in 2008 or even 2012 it would have placed them in a much stronger position to maintain economic and racial diversity today. All nonprofit housing groups should consider this strategy in the current economic climate.

Vacant land is also available for housing projects still in the approval process. Owners face the same financing problems as those with entitled projects, and confront an uncertain approval timeline.

Nonprofit buyers can get bargains by rescuing these projects. The key is making sure that the project under review is one the nonprofit wants to build; otherwise, no time or money is saved.

There is Still a Market for New Housing

I recently wrote how the coronavirus has boosted political support for funding solutions to homelessness.  It also expands affordable housing opportunities when they are vitally needed,

Urban economies will be back. And cities with jobs/housing imbalances before the pandemic will still have them. Nonprofit housers must take advantage of the current private market downturn while it lasts, as they rarely last long.