Conyers on Jobs: “We’ve Had It”; Lays Out Obama, Calls for Protest at White House 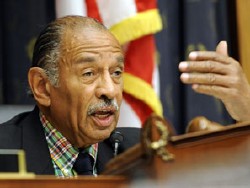 “[In 1978] we passed the first bill that allowed the government – in areas of high unemployment – to directly intervene and create jobs. Well, we’ve got the bill in here again and I’ve got nothing from the White House.” – John Conyers

At a press conference held by members of the House Out of Poverty Caucus Rep. John Conyers (D-Mich), the second most senior member of the U.S. House, was pointed in his criticism of the White House regarding jobs and cuts to Social Security the President put on the table last week. “We’ve got to educate the American people at the same time we educate the President of the United States. The Republicans, Speaker Boehner or Majority Leader Cantor did not call for Social Security cuts in the budget deal. The President of the United States called for that,” Conyers, who has served in the House since 1965, said. “My response to him is to mass thousands of people in front of the White House to protest this,” Conyers said strongly.

Though the debt ceiling debate continues, many Democrats continue to say the real issue is jobs and unemployment. Yesterday, the PEW Research Center put out a study showing the wealth gap between whites, blacks and Hispanics is wider than at any time in history. Conyers focused on jobs and the White House throughout much of what he said.

“We want full employment as a matter of government policy,” he said. “Which was passed in 1978 when I stood with Hubert Humphrey. We passed the first bill that allowed the government – in areas of high unemployment – to directly intervene and create jobs. Well, we’ve got the bill in here again and I’ve got nothing from the White House,” Conyers told the audience. Several CBC members have called for targeted help for high unemployment in the black community.

“I was the first member of Congress to come out for the 44th President. We’ve got to march on him. He’ll be before the Congressional Black Caucus on September 21st.” Conyers said referring to the annual CBC Gala. The President has addressed the gala each year he’s been in office.

Focusing on Obama, Conyers continued. “We want him to know from this day forward that we’ve had it. We want him to come out on our side not to watch and wait. We’re suffering,” Conyers said. Several members of the CBC, including, Reps. Eddie Bernice Johnson (D-Texas), Bobby Rush (D-Ill.), and are beginning to speak out more publicly on jobs and the White House policy. Many have called for a targeted approach to the problem.

Conyers then spoke on depression level unemployment in his Detroit district where the struggles of the auto industry has caused some of the highest unemployment rates in the nation.

“What Obama hasn’t said to us is “make me do it” but we have to make him do it. This is one of the most important issues we’re faced with,” Conyers said.

This piece was first published at Crew of 42, a blog that covers African-American members of Congress.