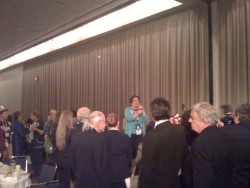 SACRAMENTO, 8:45 PM – The election results are in, and reformers at the Convention have scored a huge victory. By a margin of 54-46, Hilary Crosby defeated incumbent State Party Controller Eric Bradley – and I couldn’t have been at a better place to hear the news. There were two major dinners tonight: one was a Farewell Reception for Chairman Art Torres, where Establishment types who have run the Party for years were attending. The other was “Take Back Red California,” where a group of reform-minded delegates who want the Party to devote more resources in Republican areas convened. Howard Dean (who had inspired many of them to get involved in the Party) was the keynote speaker at the latter dinner, and awards were given to past Congressional candidates like Charlie Brown and Bill Durston. As the event was winding down, Hilary Crosby – who is on the board of Take Back Red California – came in to announce the news of her victory. The room erupted in applause. Reformers now have a foothold in the Party structure, which is what happens when you let delegates vote.