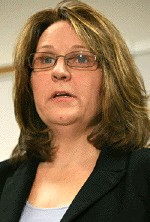 Democrats came within one seat of taking control of the Wisconsin State Senate last night – winning two of the six Republican-held seats subject to recall. But in the eighth Senate District, election tallies appear to suggest that Alberta Darling – the same Republican senator who claims those making over $250,000 are “not rich” – has eked out a narrow victory. But the results are suspicious. Democrat Sandy Pasch was leading throughout the night, but returns from GOP-heavy Waukesha County were held back – the same county, and the same clerk who botched the election results in a highly contested judicial race back in April. When returns came in from Waukesha County, Darling leaped ahead and was declared the winner. Waukesha Clerk Kathy Nickolaus – a Republican – is now under fire for allegedly “tampering” the results, and the Wisconsin Democratic Party sent out a srong statement last night calling for an investigation. But even if Darling pulls it off, Democrats made serious strides last night in Senate districts – most of whom supported John McCain in 2008. This bodes well for a recall campaign against Governor Scott Walker next year, in which polls show former U.S. Senator Russ Feingold would be heavily favored to win – if he chooses to run.