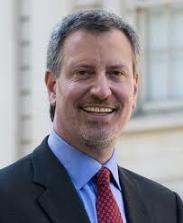 ACORN, the disbanded community organizing group and conservative boogeyman that was baselessly credited with everything from the financial crisis to stealing the 2008 presidential election, has been resurrected to attack the Democratic nominee for New York City mayor, Bill de Blasio, over his history with the group and its last chief organizer, Bertha Lewis.

The organization, which for decades worked to help the poor, became a favorite conservative media target after discredited conservative activist James O’Keefe released videos purporting to show ACORN employees helping child prostitution traffickers. The “severely edited” videos gave the false impression that O’Keefe visited various ACORN offices in a pimp costume — a lie that was parroted by mainstream media outlets such as CNN and The New York Times. The videos were so misleading that O’Keefe reportedly paid a $100,000 settlement to a former ACORN employee who filed suit against him, claiming that O’Keefe had illegally taped their conversation in a California ACORN office.

Despite conservatives’ assertions that the videos exposed criminality on the part of ACORN, three separate investigations cleared ACORN employees of any criminal wrongdoing — and law enforcement officials criticized O’Keefe for the misleading nature of his videos.

Now, more than three years after ACORN formally disbanded, conservative media are reviving the specter of ACORN after de Blasio won the Democratic nomination for New York City mayor. A September 24 New York Post story explored de Blasio’s relationship with ACORN and Lewis, and quoted de Blasio saying that he is proud of his past work with her.

But most of the conservative media stories about their relationship bring up either the discredited O’Keefe videos or the accusations leveled against ACORN during the 2008 election. Birther and conspiracy website WND posted a story on September 16 with the headline, “NEW YORK CITY TO GET ACORN MAYOR?” and said the 2008 accusations against ACORN were “a point of controversy for Obama during his campaign for president.” A September 25 Fox News segment called ACORN “the community organizing group that was forced to disband after a series of undercover tapes showed employees giving advice to how to cheat the tax system.” And a September 26 article on National Review Online, headlined “The Mayor from ACORN,” falsely claimed that O’Keefe’s videos “revealed that [ACORN] employees were complicit in illegal activity” — and then later mentioned that investigations exonerated the employees.

Conservative media have pushed numerous conspiracy theories about ACORN over the past few years, from claiming that the group was behind the Occupy Wall Street movement to claims that the group received funding from the 2008 financial industry bailout, the 2009 stimulus bill, a 2009 Senate version of the Affordable Care Act, and President Obama’s 2011 budget proposal. It remains to be seen just how far conservative media will go to link de Blasio to every ACORN fiction they can come up with, but Fox News, for one, has promised to talk about this “as we get closer to election day.”

This piece first appeared in mediamatters.org