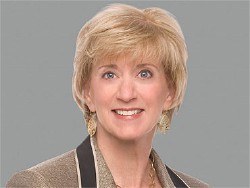 I’ve been arguing in this space for months that Californians interested in upending the gubernatorial ambitions of Meg Whitman would do well to study the petri dish that is the U.S. Senate race in Connecticut. World Wrestling Entertainment mogul Linda McMahon is spending $50 million of her own fortune there in an attempt to win the Republican nomination and then take the measure of Chris Dodd’s successor-in-waiting, Democratic state attorney Richard Blumenthal.

Connecticut is much smaller than California and – if possible – even weirder. McMahon’s wall-to-wall TV advertising has portrayed a mother and grandmother, and one-time wannabe French teacher, who is a woman. And did I forget to mention that she is a woman?

That, her experience in what she has called “the very testosterone-loaded” wrestling business, and some blather about ending government deficits and “incentivizing” small business are the sum of her pitch. (WWE, a publicly traded corporation with market capitalization of around a billion dollars, has received millions of dollars in tax breaks at all levels.)

The newspapers of the Nutmeg State are so flummoxed by all this that they don’t seem to know an honest-to-God scoop even when they unearth one.

On April 10, The Day of New London published for the first time the unexpurgated internal 1989 office memorandum in which McMahon told another executive of her wrestling company to fire their Pennsylvania ringside doctor – and also inform him that they’d gotten a tip that he was under federal investigation for illegally pushing steroids to their wrestlers. The doctor, George Zahorian, would be convicted in federal court in 1991.

Linda McMahon’s husband Vince and their company were acquitted on similar charges three years later, and the World Wrestling Federation – which had its initial stock offering in 1999 and was renamed WWE shortly thereafter – was on its merry way. As my books have documented, a statistically impossible scores upon scores of performers have failed to make it to age 50 in the postmodernist death mill of the pro wrestling industry under the McMahons’ watch.

The investigative report by The Day’s Ted Mann was originally scheduled for publication on Sunday, April 12, but got moved up when Politico.com ran a similar piece. I suspect, though cannot prove, that Politico’s was planted – a classic (and, so far, successful) “Friday evening bad-news dump” by the McMahon team to time the release and soften the impact.

What I can prove is that no one – not even, perversely, The Day itself – has followed up on this huge story. Previously it was known that the McMahons got a tip, but it was believed to have come from someone inside the Pennsylvania State Athletic Commission. The newly unredacted Linda McMahon memo somewhat confusingly refers to a source in the “State Department.” To reporter Mann, she and WWE clarified that she meant to say “Justice Department,” and they went on to identify the source as James J. West, then the U.S. attorney for the middle district of Pennsylvania, who is now in private practice in Harrisburg.

West denied that he spilled the beans to Jack Krill, a WWE lawyer, at what McMahon called “a fundraiser,” but refuses to elaborate. About the serious allegation that a prosecutor indirectly assisted the target of his own criminal investigation – and directly assisted the party that would become the target of someone else’s – West emailed me, “I am not commenting on something that happened 20 years ago.”

Linda McMahon’s own line is: “I don’t pretend to remember to go back, to revisit all the aspects of that case.”

Neither the current occupant of West’s U.S. attorney’s office, Dennis C. Pfannenschmidt, nor the acting deputy attorney general in Washington, Gary Grindler, who supervises the U.S. attorneys’ offices, has responded to my requests for comment.

The person who may know more than anyone about this scenario is another Bay Area journalist: Dave Meltzer, publisher of the Campbell-based Wrestling Observer Newsletter. Helpfully, Meltzer (who also writes a column on mixed martial arts for Yahoo Sports) has pointed out that McMahon’s claim that she can’t remember the episode is not credible. Unhelpfully, Meltzer has not gone on even to attempt to explain the significance of the difference between a tip from someone in state government (which has been his story all these years) and one from the U.S. attorney.

Upon reading my exhortation to him to add value to the public’s understanding of a Senate candidate’s background, Meltzer told a wrestling fan discussion board, “I’ve never laughed so hard in my life … this has been so much fun.”

For more, see my blog, http://wrestlingbabylon.wordpress.com.

Irvin Muchnick, author of CHRIS & NANCY: The True Story of the Benoit Murder-Suicide and Pro Wrestling’s Cocktail of Death, is @irvmuch at Twitter. He’ll update Beyond Chron readers soon on the writers’ rights case, Reed Elsevier v. Muchnick, which the U.S. Supreme Court recently sent back to the Second Circuit Court of Appeals.