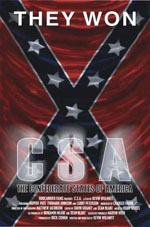 After a tour of the nation beginning last November, the movie one critic calls “satire via sledgehammer,” has finally made it home to Lawrence, Kansas. It’s fitting that Kansas University film professor Kevin Wilmott’s flick, Confederate States of America, was produced here, in Lawrence.

This state has a storied history when it comes to abolition and, surprisingly, progressive idealism ranging from early, radical support for women’s rights (women in Kansas had suffrage as early as 1912 and Representative Elizabeth Wooster was one of the first women to hold elected office in the country in 1918) to providing a haven for the publication of socialist propaganda (Henry Vincent’s press in Girard, Kansas was internationally known for its radical pamphlets—and it even once employed Eugene Debs as a writer).

Kansas, you say? What? For many folks, this doesn’t sound like the same place Thomas Frank spotlighted in his recent book, “What’s the Matter With Kansas?” Even more startling, however, is the jolting nature of Confederate States of America—especially given the flat, wheat-filled land from which it was launched: Kansas, sometimes mistaken for a glaring red rash in the heart of the U.S., is not particularly known for its racial or ethnic diversity. Yet the movie’s central theme is relevant to blue and red folks everywhere. By reconstituting the United States some one hundred fifty years after a fictional defeat of the North by the South, the film confronts us with both what we are today and what we might have been—a scary, intriguing and somewhat disturbing vision.

Nationally, the movie has garnered both kudos and barbs. Entertainment Weekly critic Owen Gleiberman gave the film an A-minus, describing it as “a fearless and brilliant racial-historical satire.” John Anderson of Newsday calls it “offensive—and creatively so,” goading its audience in what the Boston Globe’s Ty Burr declares “an act of provocation that is sheer genius.” At the same time, Manohla Dargis of the New York Times slams the movie, saying, “When the filmmaker’s anger is palpable it’s not very inspired.”

The movie unfolds as a fake documentary shown on a fictitious TV station in the “present-day” Confederate States of America. This mock-umentary is meant to give its pretend Confederate—and therefore sympathetic—audience a taste of the nation’s history, similar (though in this case satirical) to D.W. Griffith’s The Birth of a Nation. Throughout the film, phony advertisements hawk products ranging from technologically advanced slave-guard gear that will zap a potential runaway before he gets far (Intel-chip inside), to Black Sambo Car Grease and Niggerhair Cigarettes (both real products from the 1800s extrapolated to the present). The racist bent of this imaginary nation is further described in historical terms: how it allied and supported Adolf Hitler and the Nazi’s, how it made war on abolitionists like Susan B. Anthony who fled to Canada, and how John F. Kennedy—one of the “first politicians to promote an end to modern chattel slavery”—was assassinated in Dallas in 1963 for his audacious and unpatriotic proposal.

While the movie is rough around the edges—it was produced on a shoestring $30,000 budget—this is easy to ignore as its biting satire develops. Like recent Oscar-winning indie-film Crash, C.S.A. forces the viewers to confront their own—often unexpected—racism. When, for example, we find out how the C.S.A. handled the large Native American population in the late 1870s, a clear—and distressing—parallel arises between the actual United States’ treatment of Native peoples and this imaginary Confederate nation. The Confederate government locked up the Natives, drove them West, put them on reservations, made constant war and eventually, beginning in the 1890s, began sticking them in schools that stripped them of their identity, cut their hair, took away their languages…all in an effort to either integrate or eradicate the Native cultures.

Sound familiar? In fact, filmmakers did not have to edit or adjust anything from this period of “Confederate History”—they simply took the facts already present in our history books and added them to the documentary. Did we somehow think, the movie seems to ask, that we come from a completely different, spotless, non-racist, or otherwise more respectful past? And the comparison continues into modern times. Obviously, in the Confederate States of America, most of the politicians and leaders are men—all of them white—and women seem consistently confined to dresses, kitchens and smaller paychecks. And you thought, the film mocks, that racist imagery was gone from commercial and popular culture? Just ask Aunt Jemima, it declares. Just watch Braves fans do their Tomahawk Chop.

Certainly, the United States is no confederacy. Open, chattel slavery is almost unimaginable today. But this, it seems, is the central warning Wilmott and his crew direct at audiences: because we “know” our history is much different from this imaginary version of events, we tend to think of ourselves as immune to racism and its long-term, deep-seeded effects—especially those of us lodged carefully and safely in blue-state ivory towers across America.

Nonetheless, the movie is an exaggeration—hence the sledgehammer description. And no doubt, the film is vastly underdeveloped in parts, the acting shoddy at times and the technical aspects clearly low-budget. But here in Kansas, home of famous abolitionist John Brown, this clanging bell of a movie cannot be ignored. And from the rolling hills of the South to the crashing waves of the Pacific, we would do well to listen, and learn, whatever we can from what might have been.

Ed note: Confederate States of America is currently playing at the Roxie Theater.