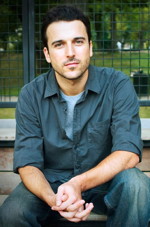 Nearly five years ago, when the Cadillac Hotel got an 1884 Steinway Concert Grand Piano and launched its regular concert series, jazz pianist and Bay Area native Jarrett Cherner performed at one of our first shows. Back then, the San Jose Mercury News called him “one of the most exciting young pianist-composers on the Bay Area scene.” He has since moved to New York, where he earned a Master’s Degree from Manhattan School of Music in 2010. Join us tomorrow, January 6th at 12:30 p.m., as Jarrett returns to the Cadillac Hotel for a special free concert – with Jeff Denson on the Bass and Hamir Atwal on the drums. Jeff is a world renowned double bassist and composer who has received rave reviews in the New York Times, DownBeat Magazine and the Washington Post. Hamir is one of the most sought after drummers in the Bay Area, and his first solo CD will be released this coming March, entitled “Hell Jazz.” The Cadillac Hotel is located at 380 Eddy Street (@ Leavenworth.) Everyone is welcome to attend Friday’s performance at 12:30 p.m.