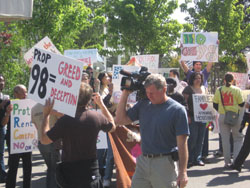 Over 50 tenant activists from San Francisco, Marin County, the East Bay and South Bay gathered on April 25th at the Oakland Airport Hilton – to protest the Apartment Owners Association (AOA)’s seminar on how to evict tenants. The landlord group has provided crucial seed money to pass Proposition 98 in June, and its President – Dan Faller – has called tenant advocates “terrorists” and “suicide bombers.” The tenant activists denounced new “Yes on 98” radio ads that are running in the Bay Area as dishonest, and stressed the need to run a grassroots campaign to defeat the measure. In related news, Governor Arnold Schwarzenegger and Senator Dianne Feinstein came out against Prop 98 – further proving that the AOA is a fringe group that does not represent California.

One would hope that the AOA seminar – called “How to Get Through the Eviction Process” – would instruct landlords on how to respect eviction laws, so that landlords don’t harass tenants through extra-legal means. But they also taught them how to get around current loopholes. And the landlord group is pushing for Prop 98, which if passed would abolish rent control and “just cause” for evictions. While AOA members paraded into the Airport Hilton to attend the seminar, tenant activists were on hand to protest Prop 98.

“We are here,” said Guadalupe Arreola of St. Peter’s Housing Committee, “to let AOA know that we are going to beat Prop 98 – and we will fight you on every eviction.” St. Peter’s was joined by Just Cause Oakland, East Bay Alliance for a Sustainable Economy, Pride at Work, ACORN, the Tenants’ Voice Council of Marin, and the Interfaith Alliance of East Palo Alto. Over 50 people chanted in English and Spanish, held up signs, and one guy dressed up as a “greedy landlord” and handed out eviction notices to the crowd.

Dan Faller, President of the AOA, has referred to all tenants as lazy – and called pro-tenant elected officials “terrorists” and “suicide bombers.” In a letter published in AOA’s magazine, Faller called on landlords to fight back with the “big bomb” – Prop 98, in a “war” for their property rights. “You are either for us or against us in this fight,” he wrote. AOA members did not talk to the press at Friday’s protest, but handed copies of Faller’s infamous letter.

The “Yes on 98” campaign has begun running radio ads in the Bay Area with two siblings who lament that their home will be taken by eminent domain – which means that the family would have to move. “These ads are deceptive,” said Arreola, “because families are the ones that will be evicted if Prop 98 passes. We’re calling on them out for running deceptive ads that tell us to pass a deceptive measure.”

Proposition 99 – which would reform eminent domain without abolishing rent control – would protect the hypothetical family in the “Yes on 98” radio ads, without displacing the millions of families who would lose basic renter protections. Ironically, however, the radio ads urged listeners to vote against Prop 99. Activists at the protest spoke out in favor of Prop 99 – which would also nullify Prop 98 if it gets one additional vote.

Oakland tenant Charlene Weddeburn successfully fought an eviction that would have been legal under Prop 98. Photo by BeyondChron.

Prop 98 would invalidate laws that protect tenants from eviction if their landlord doesn’t pay the mortgage. “My apartment building was foreclosed on,” said Charlene Weddeburn, a mother of three from West Oakland, “and the new landlord tried to raise my rent from $650/month to $1000/month. When I told him I knew my rights, he said he would take me to court. I won, because of protections that are in place now.”

“I can’t imagine what would have happened to me and my three children if these laws were not in place,” said Weddeburn. “Prop 98 threatens our right to stay in Oakland. If rent control disappears, there will be more displacement in California. We have the right to stay in our communities where we work, raise our children and call it home.”

Stuart Highland, an SEIU member from East Palo Alto who works with the Interfaith Alliance, told the crowd how they defeated a landlord measure at the local level. “We went door-to-door talking to tenants, and let them know that it was just a greedy sham. Prop 98 would destroy local programs that we have in Berkeley, Oakland and East Palo Alto. We know that every working family contributes to the quality of life here in the Bay Area. We need to get out the word in our communities about Prop 98.”

They’ll get a little help from a few popular statewide politicians who are more politically moderate. Governor Arnold Schwarzenegger and U.S. Senator Dianne Feinstein have both come out against it. “Prop 98 would undermine California’s ability to improve our infrastructure,” said Schwarzenegger, “including our water delivery and storage. California voters strongly support rebuilding our transportation, housing, education and water projects, so it would be irresponsible to support a measure that would prevent the state from accomplishing our goals.” Prop 98, said Feinstein, is “reckless and would tie the State’s hands in dealing with a wide range of critical issues.”

Two years ago, Arnold came out against Proposition 90 – a slightly less extreme measure that would have nullified any future efforts to expand tenant protections – but did so just a few days before the election when many Californians had already voted. This time, he’s come out against Prop 98 more than a month before the June primary. His early opposition must be commended, and will be instrumental in helping bring Prop 98 down to defeat.