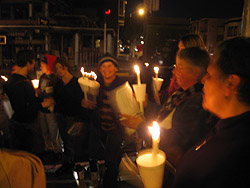 Christmas is a time of giving and sharing, but the Golden Gate Restaurant Association has said “Bah humbug” to the City’s bold step in passing universal health care. On the day after the Election (right after their failed attempt to defeat Paid Sick Leave), GGRA filed a lawsuit against the City to prevent the implementation of the Health Care Access law. While the lawsuit is pending in court, GGRA celebrated the Holiday season with a private party near Ghirardelli Square. But a coalition of about 50 labor, civil rights and community activists staged a vigorous protest – demanding that GGRA drop this lawsuit and support universal health care.

“I really wanted to give the F-U speech,” said Supervisor Chris Daly at the rally, “but I think my wife already gave that.” There was a protester dressed up as Scrooge, another dressed up as the Grinch, and GGRA members were handed a bag of coal as they entered the restaurant. Meanwhile, protesters serenaded the crowd with Christmas Carols such as, “you ruined our Merry Christmas with your greedy lawsuit,” and others. “I don’t think that it was a coincidence that [they filed the lawsuit on] the day after the election,” said Daly. “What would have been the impact on the election if they had announced their lawsuit one week before?”