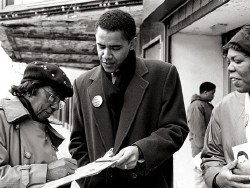 Some activists excited about Barack Obama’s community organizing background forget what this fully means – namely, that he expects groups seeking progressive measures to mobilize their base. Community organizers do not expect politicians to challenge entrenched interests absent grassroots pressure, and President Obama is not about to spend political capital on issues like Afghanistan, the military budget, or “Don’t Ask, Don’t Tell” without an organized campaign. But a surprising number of progressives have skipped Community Organizing 101, and are now angry that Obama is not taking on entrenched interests by himself.

If President Obama had a honeymoon among hard to please progressives, it is now over. Activists are criticizing the President on many grounds, including not withdrawing troops from Afghanistan, not making big enough military budget cuts, failing to stop the ouster of gay and lesbians from the military and to legalize needle exchange, and for a range of alleged missteps related to Guantanamo and Bush torture policies.

What is striking about much of this criticism, particularly from anti-war activists, is how little it is combined with grassroots pressure. Some apparently believe that Obama should wage a war with the military industrial establishment over defense spending and Iraq / Afghanistan policies despite a lack of supporting activism.

But that is not how community organizers view the social change process.

Community organizers recognize that even progressive politicians cannot be expected to challenge powerful interests in the absence of a mobilized grassroots base. That’s why community organizing is so important, and why its under funding for over a generation has hurt the progressive cause.

Unlike many of Obama’s progressive critics, community organizers do not expect politicians to “do the right thing” in the absence of public support, or if this jeopardizes a broader agenda. Organizers understand that it is all about power, and that winning the change we need requires mobilizing people, not simply lecturing to politicians.

Obama’s community organizing approach is seen in his moving quickly on issues –universal health care, national service, cap and trade, alternative energy – where grassroots activists and groups have been aggressively mobilizing. This approach is even clearer in his announced willingness to begin tackling comprehensive immigration reform this year.

After word spread that Rahm Emmanuel described immigration reform as the “third rail” of politics, many assumed that Obama would put the critical measure on the back burner. But after immigrant rights activists mobilized public support for prompt action, Obama surprised pundits by announcing on April 8 and that he would begin discussing legislation creating a path to legalization for the nation’s 8-12 million undocumented immigrants this fall.

Obama has also responded to labor’s mounting of a national campaign to enact the Employee Free Choice Act (EFCA). Obama’s public commitment to passing EFCA has not wavered because unions have demonstrated that there is an actual base of millions of people demanding prompt passage of the legislation.

Obama has been criticized for not stopping the ouster of gays under “Don’t Ask, Don’t Tell,” and for delaying the legalization of needle exchange. But while the gay and lesbian community is organizing and mobilizing as never before, most of this activism is directed at state efforts to legalize gay marriage.

Few gay leaders are demanding that Obama prioritize changing the “Don’t Ask, Don’t Tell” military policy, and most progressive queer activists want to avoid seeing Obama’s progressive agenda for 2009 get bogged down in this issue. The same is true for needle exchange. Obama will likely not come under grassroots pressure to eliminate the federal Defense of Marriage Act until California enacts gay marriage, either through an imminent California Supreme Court ruling or a November 2010 pro gay marriage ballot initiative.

Where is the Anti-War Movement?

While environmental, labor, energy and health care activists are mobilizing for change, the same cannot be said for the anti-war “movement.” Even the widely-used term “movement” is a misnomer, as the street protests that surrounded the U.S. invasion of Iraq did not create a mass organizational base from which ongoing challenges to the nation’s military budget or foreign policy could be waged.

Trained as a community organizer, President Obama no doubt looks at the lack of grassroots mobilizing against his Iraq, Afghanistan, and military budget policies and concludes that his critics lack a popular base. After all, as a candidate for President he repeatedly told audiences that he could not institute change by himself, but that real change required constituencies to mobilize once he reached the White House.

Unfortunately, grassroots resistance to steep military spending levels and to the intensification of the Afghanistan conflict has not emerged. And since we have a President trained as a community organizer rather than as a journalist or academic, progressives should not expect real change in these or other areas until such grassroots power emerges.