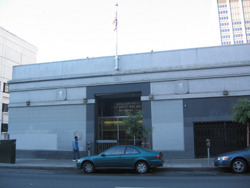 For years, the corner of Hyde and Golden Gate, site of a minimum-service post office, has been an uninhibited trafficking point for drugs—not to mention a congregating stop for various unseemly, even dangerous denizens. It’s for this reason, explains a press release put out this week by a coalition of neighborhood organizations that “Tenderloin merchants and residents will hold a press conference at the Post Office…to demand that the federal government stop allowing criminal activities at the site.” The coalition, including Hastings College of Law, The New Tenderloin, the Tenderloin Housing Clinic, Tenderloin Neighborhood Development Corporation, the Chinatown Community Development Center, the YMCA, the Safety Network and the North of Market Community Benefit District, plans to hold the press conference today, December 13, at noon.

The problem, argues Elaine Zamora, head of the Community Benefit District, is that the Post Office—and consequently the corner generally, since the building occupies a huge chunk of the block—“is poorly secured, has huge windowless walls, and is understaffed.” In turn, this means the site is ripe for drug dealers, many of whom feel comfortable enough to do their business in broad daylight—with their backs safely against the windowless walls of the Post Office building. “Drug dealing,” says the press release, “is a daily occurrence” around the perimeter of the building—and one need only walk by at any odd hour of the day to confirm this. Men in stocking caps or ballcaps with the brims pulled low will casually toss out their offers to passersby who seem like likely drug-purchasing candidates.

But it’s not just drug dealing that’s driven these community organizations to action. Safety, too, has become a serious concern. David Seward of Hastings College of Law wrote the Postal Service and the office of Nancy Pelosi late this summer detailing a nightmarish experience one of Hastings’ students had had in the Post Office. According to Seward, the student—a woman—was accosted by a man near the corner of Golden Gate and Hyde. She was able to escape and fled into the Post Office—thinking it a safe, federally-funded space. She was wrong, says Seward. Instead of finding safety, she found a nearly deserted warren of rooms (the building is staffed by one or two workers at most who operate behind a gated window in the far corner of the office). With no one around, she was all but cornered—and only managed to escape, says Seward, by way of good luck and a quick dash for the doors.

What’s more, the Tenderloin—which is a neighborhood, says the Tenderloin Housing Clinic’s Randy Shaw, that’s trying to grow into a healthy, clean community—does not as of now have a full service Post Office. The building on the corner of Golden Gate and Hyde has only postal boxes and a window for mailings and postage. There is of course the Federal Building down the street, but to enter one must submit to a series of searches—all just to send a few holiday packages. Most disturbing, says Alysabeth Alexander, a community activist with La Voz Latina, Hispanic residents of the Tenderloin—especially those with less than secure status in this country—almost always feel too intimidated by the prospect of entering the Federal Building. For them, there is no postal service in the Tenderloin—and many of them will be trekking blocks and blocks, to the Mission, to Market, to send their mail this Christmastime.

As opposed to so many of the social problems that plague San Francisco, solving this one seems relatively easy—all that’s required, says Zamora, is a little political muscle to convince the Postal Service that it’s time to quit federally funding a crime zone and convert the Post Office to a full-service station. “A full service post office will increase citizen traffic and commerce and improve security on the corner dramatically,” she says. “The Tenderloin is a residential neighborhood that deserves a full-service post office.” The press release further implies solutions by pointing out that the building’s structure itself is part of the problem: “[The Post Office’s] concrete walls create a perfect screen for drug dealing on the sidewalk, a problem that could be reduced with the installation of additional windows.” Or, suggests the news release, “additional staff”—security personnel for instance—could also help keep drug trafficking and danger to a minimum.

The best solution, however, says box-holder Michael Nulty, is for the federal government to convert the station to the full-service outlet the community deserves: “Postal Patrons want retail services along with safe facility to enhance our community 18 years in the making.” To Nulty and to those who’ve organize the press conference—and who demand action from the federal government on this matter—converting the post office to a full-service station is a “win-win” solution.