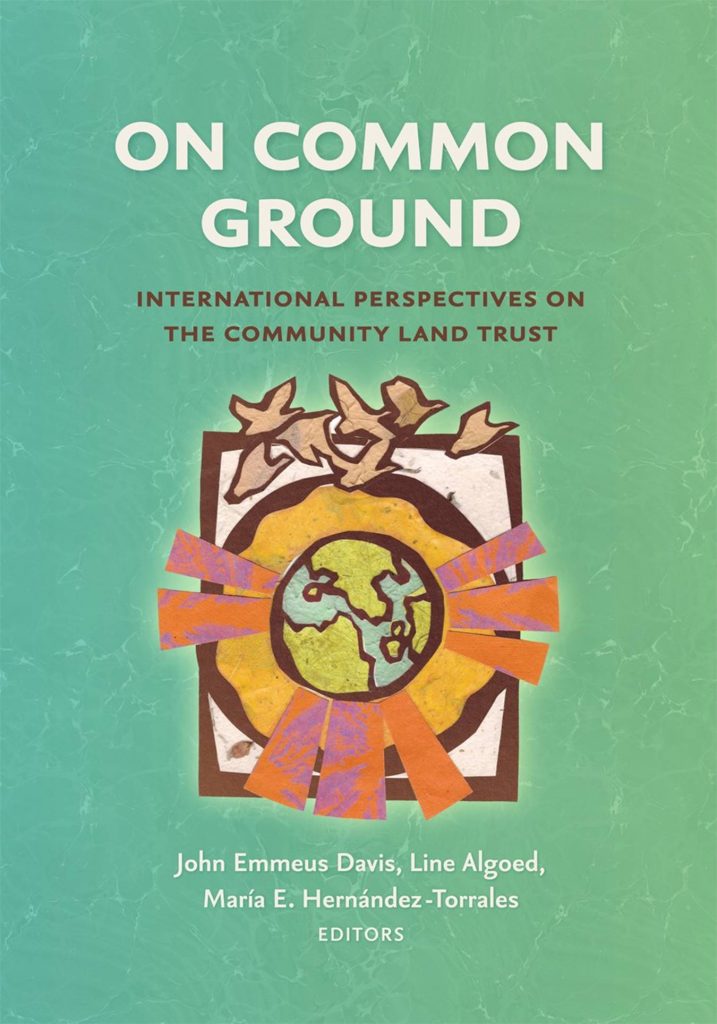 As demand for affordable housing grows across the United States and the world, the question has emerged: what are the best affordable housing strategies? A new book, On Common Ground: International Perspectives on the Community Land Trust, makes a strong case for the value of community land trusts (CLTs)

What is a CLT? Here’s the author’s working definition: community-led development of permanently affordable housing on community-owned land. Community land trusts began in 1972. And if its backers could have a do over they might not have included “trust” in the name.“Community” reflects how those living on the property have democratic voting rights in the organization. “Land” speaks to CLT’s as nonprofit organizations that remove land permanently from the speculative market. But real estate trusts have nothing to do with CLT’s. “Trust”  instead refers to the nonprofit group being entrusted to preserve the affordability of the property and the quality of the buildings.

I raise the issue of the model’s name because I find a lot of people don’t know what community land trusts actually are and what they do. Had the model been named “community land stewards”—which is what CLT’s actually are— it might have spread further and faster, at least in the United States.

Everything You Need to Know

On Common Ground offers everything readers need to know about CLT’s. It’s divided into short chapters covering CLT’s in the United States and worldwide. The CLT is the broadest used housing model in the world. The book includes chapters on its use in Africa, Europe, South Asia, South America, Central America and other regions.

Its international popularity explains the model’s flexibility. The surrounding land and economic conditions for CLT’s differ greatly. But all have in common the core concept: permanently affordable housing on nonprofit owned land.

I found the structure of the book extremely helpful. Readers can turn to the chapters that most interest them. There is no pressure to read from beginning to end without risking losing track of the argument. I was particularly interested in the chapter on the Denver-based Urban Land Conservancy (ULC). I write about ULC in my book, Generation Priced Out. Its creative use of land-banking should be a national model, as it is a brilliant affordable housing strategy. The chapter on ULC is written by Aaron Miripol, its President since 2007, and journalist Alan Gottlieb.

Miripol was a believer in CLT’s when he took the ULC job and in the past 13 years has developed eight major projects using the ULC model. Among their key strategies is buying land adjacent to light rail lines. These sites are often cheaper because they lack current transit activities, making them less attractive to private investors. ULC also focuses and investing in the city’s African American neighborhoods to preserve affordability and prevent displacement in a city where the lack of eviction protections facilitates gentrification.

While many CLTs primarily do homeownership, ULC does exclusively rental housing. It also purchases sites for community centers and schools and has a far wider geographic scope than the many CLT’s that work in a single neighborhood.

On Common Ground comes out amidst a push for “social housing” by DSA chapters across the nation. Social housing is run by the government. And unlike CLT’s or traditional nonprofit housing development corporations, social housing is not “community based.” In the traditional CLT model residents have a say in running their building, which is a more “democratic socialist” model than social housing provides.

Earlier this year, housing activists organized as Moms 4 Housing occupied an Oakland home for two months to highlight the city’s housing crisis. Last week, the home was sold to a community land trust for $587,500. The property will be house homeless mothers and their children. It is an example of what the flexible model of CLT’s can accomplish. Backers of social housing should consider integrating the CLT model into their housing strategy as it offers more resident participation in decision making than other housing strategies.

With a potential Democratic presidential administration on the horizon and with the National Low Income Housing Coalition already assembling a strong national campaign for increasing federal affordable housing (Our Homes, Our Votes) the timing of this book could not be better. On Common Ground makes a strong case for CLT’s to be a front-burner housing option. I strongly  encourage those unaware of the benefits of this housing model to read this book.