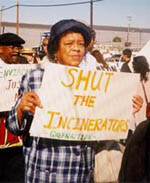 In fact, there is no such agreement, no date, no contract, nothing binding whatsoever. Also, neither PG&E nor Mirant have agreed to close their plants. In addition, even if there was a binding deal, this is a back room agreement that allows the PG&E plant to keep operating for at least another 14 months–probably much longer.

Contrary to claims that this deal will close the power plants, it in fact pushes back the promised closure date for the PG&E power plant, and contains absolutely no guarantees whatsoever that either the PG&E Hunters Point power plant or Mirant’s Potrero plant will be closed. Both companies can apply for new permits and would be allowed to continue operating even if the California ISO removes the “reliability must run contracts.”Even the ISO has said they might change the agreement at a later date.

And we recently learned that PG&E has already thrown a monkey wrench into the deal, stating that the Jefferson-Martin transmission line that the ISO wants completed before they will o.k. the shutdown of the Hunters Point plant will possibly be delayed beyond Spring of 2006 –.in other words, more delays, more broken promises, more asthma and more environmental racism.

Southeast San Francisco Community groups were dismayed that Supervisor Sophie Maxwell would endorsed such a plan. “We’ve been sold down the river by our leaders. We’re very disappointed in her for lying to us this way. Has she forgotten that she lives in our community too?” asked Tessie Ester, President of the Huntersview Tenants Association. “Frankly, I’m just disgusted with our City.”

“How stupid do they think we are?” asked Marie Harrison, Greenaction Community Organizer for Bayview Hunters Point. “They’ve extended the life of this killer plant one more time and they’re crowing about it. Not only will this deal not guarantee closure of these dirty plants, but the date for the PG&E Hunters Point plant has just been unacceptably extended.”

Greenaction for Health and Environmental Justice, the Huntersview Tenants Association, All Hollows Garden Residents Association and Community First Coalition have issued a call for a major community action to close the PG&E Hunters Point power plant NOW. The action will take place at the front gate of the power plant at 12 noon on December 8. The theme will be: “If the government won’t, then the people will, close the power plant.”