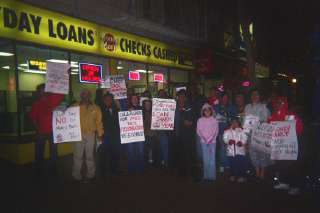 Members of the community group ACORN and Money Mart protested at Money Mart stores in more than 30 cities throughout the U.S. and Canada yesterday, including here in San Francisco at a Market Street Money Mart location. The group presented the business with a “Loan Shark of the Year” Award for gouging customers through predatory payday lending, criminal check-cashing fees, and rip-off refund loans.

“This company’s entire business is based on gouging people in need,” said ACORN member Paulette Chappill-Otten, “and we aren’t going to take it any more”. A San Francisco resident, Miss Chappill-Otten got a payday loan from Money Mart for $500 and wound up paying them back more than $800.

A $300 payday loan from Money Mart costs $352.50. If after two weeks the customer can’t pay the full amount, they pay the $52.50 finance charge and Money Mart rolls the loan over for two more weeks. If, as in many cases, this continues for three months, the customer will have paid Money Mart $341 in interest and still owe the entire $352.50 loan amount.

ACORN is the nation’s largest community organization of low- and moderate-income families, with over 150,000 member families organized into 700 neighborhood chapters in 60 cities across the country. ACORN’s website is at http://www.acorn.org.