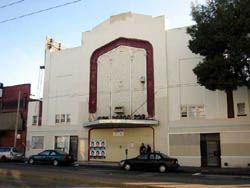 When the battle to save the Harding Theatre commenced, few thought it a winnable one. Many questioned the historical value of an abandoned building on Divisadero, and the possibility of stopping its demolition seemed remote after the Planning Commission approved it. Yet surprisingly, community activists and Supervisor Ross Mirkarimi recently managed to wrangle a serious compromise offer from the building’s developer. Before today’s hearing on the Harding, those fighting for the theatre’s preservation should recognize that the compromise, which prevents the theatre’s demolition for at least five years, represents a hard-fought and well-earned victory.

The offer made by the building’s owners, Divisadero Hayes LLC, includes several significant concessions to community members concerned with both historic preservation of the Harding and the possibility of injecting a theatre into the quickly improving Divisadero retail strip. Perhaps the most important of these consists of the five-year promise of no demolition of the 79-year-old theatre.

In the initial plan for the Harding, the current building would be leveled, and 18 condominiums would be built in its place. Now, instead of 18, Divisadero Hayes offered to only build nine, all of which would face Hayes Street. While their construction would encompass a small portion of the rear of the Harding, the back wall of the theatre would be rebuilt and seismically strengthened.

The developer also agreed that should a demolition ever be requested, the owner must prove they’ve invested at least three-quarters of a million dollars to retrofit the theatre. This sum would improve more than 70 percent of the building, and ensure the owners made real efforts to improve the Harding’s chances of being rented out by a potential entrepreneur.

For those concerned that the offer represents a developer’s boondoggle, the compromise also makes explicit that should opposition to future actions of theirs surrounding the building exist, litigation against Divisadero Hayes remains possible.

The offer appears to represent a real show of good faith on the developer’s part. By earmarking such a large sum to retrofit the building before it can be demolished, they’re taking a significant financial risk that a renter will eventually materialize to use the Harding.

Some claim that the offer remains unenforceable. But should the Board of Supervisors amend the conditional use permit issued for the Harding Theatre site to include Divisadero Hayes’ offer, their concessions will be completely enforceable. Even if the city didn’t ensure these concessions, the developers would still be vulnerable to a lawsuit should they not comply with them.

When community activists began the fight to save the Harding, it appeared they had no chance at victory. Yet now they can rest assured the theatre will remain in their neighborhood for at least five years, and that it will have the best opportunity to be picked up by someone willing to operate a business there.

Activists are on the verge of cementing a huge victory over Harding, and risk losing all that has been achieved by proceeding with a Board vote that they could easily lose.