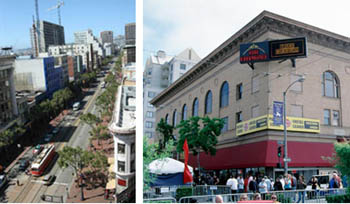 The Board of Supervisors Government Audits and Oversights Committee will vote today on approving the initial step towards the creation of Community Benefits Districts (CBDs) in both the Fillmore and Mid-Market neighborhoods. In order to ensure these communities qualify for funding this year, the Committee must move fast in its approval – so fast, in fact, that the Controller will have to waive the economic analysis of the CBD legislation that the voter-approved Proposition I requires. But some of the groups that strongly support the CBDs and the economic analysis waiver (the Chamber of Commerce, property owners, and merchants) are the very same groups behind a lawsuit against the city that would eliminate the Board’s ability to enact exactly these kinds of waivers. Apparently, those behind the Prop. I lawsuit want to freely pick and choose when waivers of economic analyses are granted.

A group of downtown business interests joined forces last month to legally challenge the city’s implementation of Proposition I, a measure passed by voters in 2004 requiring an economic review of proposed legislation. The suit argues the city controller consistently fails to complete such an analysis, and asks that the President of the Board of Supervisors’ current power to waive economic studies of legislation be eliminated.

Board President Aaron Peskin originally had planned today to comply with the wishes of those behind the lawsuit, which includes the Chamber of Commerce, Committee on Jobs, and San Francisco Association of Realtors. Peskin was going to give up his right to waive the economic analysis of the CBDs, triggering a review by the controller’s office of both proposals.

However, supporters of the CBDs quickly cried foul. Here’s why:

The process to create a CBD is a tricky one. CBDs are a relatively new way for neighborhoods to improve their communities, in which over half of the property owners in a proposed district must agree to an additional tax. The income from the tax goes towards cleaning the district’s streets and sidewalks, along with other general improvements to public areas.

After a neighborhood declares its desire to become a CBD, all property owners in the area must vote on the proposal. To be able to hold the election, however, the Board of Supervisors must approve the community’s request to move forward with the voting process. And in order for the taxes to be implemented during the next fiscal year, the election must take place by October.

The timing works out so that the Committee must approve the request for the Fillmore and Mid-Market CBDs quickly in order for these areas to get any funding at all during the next fiscal year. So, proponents wanted an economic waiver.

So far, CBDs have represented rare instances in which broad consensus is reached among a variety of competing interests. While the Mid-Market CBD may face some opposition, it and the Fillmore proposal have the support of many property owners, merchants, and business interests.

However, it’s exactly these groups that would stand in the way of these CBDs being created on time. The Prop. I lawsuit would eliminate the possibility of the economic waiver occurring today.

“This is the perfect example of how the law of unintended consequences can affect an otherwise good project,” said Peskin’s aide David Owen. “And it’s because of the sloppy and irresponsible way that Prop. I was placed on the ballot.”

Owen is referring to Supervisor Michela Alioto-Pier’s rushed move to get Prop. I on the ballot in 2004, which received little public input and vetting from city officials. The Board had to add the provision allowing the ability to waive an economic analysis after the measure was passed by voters in order to prevent important proposals, like today’s CBDs, from being upended unnecessarily.

When Mayor Gavin Newsom discovered Peskin planned on adhering to the Prop. I lawsuit regarding the CBDs, he requested the Controller waive the economic analysis himself.

Newsom and his allies at the Chamber, Committee on Jobs, and other wealthy downtown interests should be honest about the Prop. I lawsuit. Their goal is not better city policy – rather, it is to politically attack the Board of Supervisors.

The Prop I lawsuit really represents an attempt to kill any proposals that would ask downtown to pay its fair share for operating San Francisco’s government.