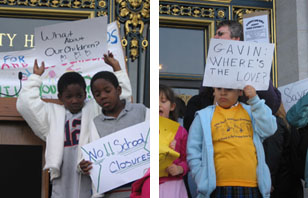 An energetic mass of over 100 students, teachers, parents and elected officials jammed the steps of City Hall yesterday, calling for a delay in the current plan to shut down 19 schools across San Francisco. Spearheaded by Supervisor Ross Mirkarimi and a grassroots coalition of community members, the rally called attention to the disproportionate affect the closures will have on people of color, as well as the lack of public engagement in creating the plan to shutter schools. Speakers demanded school district officials and Mayor Gavin Newsom immediately halt the closures to allow time for more community input and the development of creative alternatives to the current plan, which the School Board will vote on tonight.

The San Francisco Unified School District currently faces a budget shortfall of $5 million, and recently unveiled plans to shut down or merge 19 schools citywide to close the gap. Speakers at yesterday’s hearing made it clear they understood the realities of balancing a budget, but that the process and manner the District planned on doing so this year had fatal flaws.

Perhaps the most fatal involves the fact that African Americans make up 36.7 of the children being affected by the closures, yet blacks only make up 13.9 percent of the school district’s student population.

This disparity raised the concern of District 10 Youth Commissioner Cassandra James, who recently relocated to San Francisco due to Hurricane Katrina. The disaster shut her school down in New Orleans.

“It’s surprising that without a disaster here [in San Francisco], so many of my fellow African-American students are facing the same issue of not being able to attend their school here,” said James. “Why do we keep thinking that it’s coincidence?”

In addition, a variety of parents and elected officials decried the School District’s decision-making process regarding the closure plan. According to them, the public received little or no opportunity to weigh in on which sites should be considered for closure, or to offer other possibilities for balancing the budget rather than axing so many schools. This lack of community input led those at the rally to demand an immediate delay in the closure process so their grievances could be addressed.

“What we expect is a respectful process,” said Mirkarimi. “There’s something incredibly unjust, incredibly unfair about the current process…we are forced into being here today.”

Newsom received pressure from a variety of fronts at yesterday’s rally to help solve the crisis. Parent Joan Livingston, for example, submitted a letter to Newsom after the rally that strongly urged him to use some of the city’s budget to delay closures.

“With our city’s budget of $5.3 billion,” said Livingston, “there’s got to be a little to stop the problem temporarily and think of a more creative approach.”

In addition, Mirkarimi highlighted the disparity between the Mayor’s public commitment to keeping families in San Francisco, yet failing to work hard enough to stop schools from closing.

Former Mayor Art Agnos made a surprise appearance at the event, detailing to the crowd the historic commitment of San Francisco’s mayors to making education a top priority for the city. Agnos said that the proposed round of cuts revealed a current of pessimism by the city’s decision-makers regarding finding solutions to keeping schools open.

“Kids are being treated as if they’re the past, not an essential part of our future,” said Agnos, who pointed out that of all the current proposals for solving the school district’s budget crisis, none included increasing enrollment. “Sound public schools are an essential part of dealing with the social problems in our neighborhoods.”

Other speakers underscored Agnos’ statements, particularly regarding the connection of well-funded schools with healthy communities. Mirakrimi suggested a connection between pockets of high homicide rates existing in the same areas where schools were threatened with closure. Supervisor Tom Ammiano recalled Harvey Milk’s battle to save a school in the Castro, because he felt the loss of a school meant the beginning of a decline for its surrounding neighborhood. And Supervisor Sophie Maxwell, in her final plea that the closure process be delayed, said that the health of the schools and the health of their communities remain inexorably tied.

“The school district needs to go back to the drawing board,” said Maxwell. “They need to include us – we are the ones who make this district work.”

The School Board will decide whether or not to heed her call at their meeting tonight.