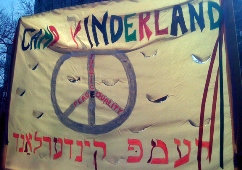 Do you like progressive ideals spanning the political left? How about cute kids espousing those ideals in an idyllic New England setting, or who can talk about the horrors of the Holocaust and Hiroshima like other kids talk about last night’s ballgame? Or perhaps you enjoy laughing at Glen Beck and Rush Limbaugh while they try to drum up fear about the grown-ups who create institutions to nurture these budding progressive kids?

If you can answer yes to any of these questions, don’t miss Commie Camp, the 2013 documentary about Camp Kinderland, playing this Sunday at the Grand Lake Theater in Oakland as part of the San Francisco Jewish Film Festival. It is a wonderful, hopeful film raising serious issues that, thankfully, doesn’t take itself too seriously. It’s a film that will make you laugh, possibly cry, and certainly have faith in at least one segment of the next generation.

Camp Kinderland was founded in June, 1923 in Western Massachusetts by secular Jewish socialists and communists, primarily immigrants from New York City. Filmmaker Katie Halper is a third generation camper/counselor who strikes a perfect chord in singing the camp’s praises; sharing the camp’s history, ideals, and current program with humor and candor. She does this by interspersing old stills and clips, stories of current campers (told in their own precocious words), beautiful shots of New England summers, and interviews with Kinderland’s old-timers. Throughout, she weaves her personal family story into the fabric of this amazing institution.

The history of the camp is impressive. Targeted during McCarthyism, the camp and its leaders stayed true to their progressive commitment, seeing enrollment dip as more fearful parents stayed away. Kinderland always put a value on inclusion and diversity, and while founded by Jews, those Jews readily embraced non-Jews who shared their values. Today, the camp community is multicultural with a Jewish flavor. Watching a generation of youngsters learn the iconic Partisan Song in Yiddish, or hearing a camper explain the daring courage of World War II hero Hannah Szenes would make the camp’s founders proud – and may likely put a lump in a viewer’s throat.

Despite the ravages of the McCarthy era, the camp survived, and now stands as a beacon for how the world could be. A place where cabins are named for people such as Ann Frank, Pablo Neruda and Joe Hill. Where instead of the traditional camp color war there is a yearly Peace Olympics. In the year featured in the film the teams were GreenPeace, Jews for Racial and Economic Justice, Center for Constitutional Rights, and the Highlander Center. Yes – teams competing in games, creating costumes, and performing skits and cheers in support of endangered penguins and abortion rights. Wow!

As a long-time camper, I know first hand what a special place camp can be. The opportunity to live in a beautiful setting with kids your own age, away from parents, soaking in independence, growing as a person is, for a certain type of child of which I was one, unparalleled. As an adult, I still recognize and appreciate that camp can be an experience of untold value to the children privileged enough to have the opportunity. To watch a film where this environment is consciously infused with progressive values made me wistful about how the world could be. (Maybe more important, it made me long to be at Camp Kinderland — shouting with unbounded joy about civil rights and water conservation!)

Because the kids in this film are so adorable, the politics heartwarming, and naysayer Rush so ridiculous, Halper could have easily veered onto a smarmy self-righteous route. But she doesn’t. At its core the film is about the important and very serious question of just how values are transmitted to the next generation. As one of the campers says towards the end of the film, the whole point of Camp Kinderland is to make children “mensches” – good, decent people with progressive values. People who will take those values out into the world beyond camp. How do we know? The film ends with a mini-Kinderland reunion at an Occupy Wall Street rally.

Commie Camp is playing Sunday, August 11 at the Grand Lake Theater in downtown Oakland at 2:20. A great summer treat, not to be missed.