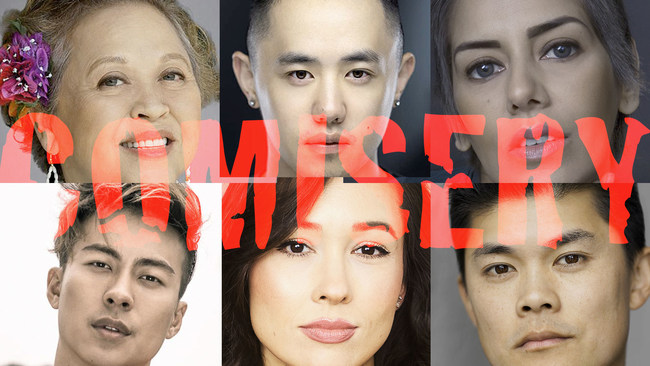 Admittedly, life under coronavirus lockdown is not material readymade for comic treatment.  The new Web Series “Comisery” attempts to solve that problem by using the need for sheltering in place as the basis for a science fictional apocalyptic dark screwball comedy.

“Comisery” is the brainchild of two Asian-American co-directors and writers.  One is Quentin Lee, a director whose prior films (which include “Shopping For Fangs” and “White Frog”) have appeared at CAAMFest as far back as 1995.  He’s co-produced the Hulu Asian-American stand up comedy series “Comedy InvAsian.”  One of his other current projects is “AKA Deadlee,” a documentary musical biography of the titular pioneering gay rapper, most recently known for making a video with then-presidential hopeful Andrew Yang.

The other co-creator of “Comisery” is Adisakdi Tantimedh, author of the “Ravi P.I.” series and columnist for the Bleeding Cool website.  Viewers of the third season of the Netflix show “Stranger Things” may have seen the 1980s anime style fan trailer Tantimedh scripted.  Long-time Beyond Chron readers will recognize Tantimedh’s name as writer of the “superhero as sexual and political activist” seriocomic graphic novel La Muse.

(In the Department of Very Belated Corrections comes a couple of corrections to the “La Muse” review.  First, New York City’s rent stabilization program is a different beast from the rent control system used in San Francisco.  Second, narrator Libby La Muse eventually turns out to be a lot more than the comic relief character she initially appears to be.)

The Zoom video conferencing platform was used to shoot “Comisery”’s episodes.  This makes sense as Web Chat sessions among a group of Asian-American friends are used to tell “Comisery”’s story.  The two episodes that have been released as of this writing introduces four of the show’s six characters.  If some of the actors look familiar, it’s because their collective prior screen and TV credits include “Gran Torino,” “Magnum P.I.,” “9-1-1” and “Shameless.”  Veteran comedian and character actress Amy Hill, whose therapist character is introduced in episode 2, will be the most familiar face in the cast thanks to her having over 180 film and TV credits.

Skylar (Bee Vang) is a trans nonbinary person still mourning their lover Danny’s death.  That state of grief partly explains why they greet their friend Kel (Harrison Xu)’s story with far from open arms.  Supposedly, Kel’s body is now inhabited by the spirit of his 20-years-from-the-future self.  He’s traveled back in time to stop an alien viral invasion which will destroy life on Earth.  Getting Skylar’s help is somehow key to changing the future.  However, Kel only manages to convince Skylar that he forgot to take meds helping him with his grip on reality.  Also, there are signs the alien virus is already here on present day Earth…and that sheltering in place might not stop its spread.

Of the two episodes released so far, the second episode proves the more satisfying episode.  The series’ tragedy and wit are better balanced, best seen in Skylar’s line about Danny’s funeral being “Comicon for homophobes.”  Also, a moment where Skylar’s therapy session with Mary (Hill) gets interrupted by a racist Trump supporter (an admitted oxymoron) turns “Comisery”’s use of Zoom from a novelty into an important character in the story.  Zoom videoconferencing provides the medium for the series’ characters to interact with each other.  But the seeming ease with which the program can be hacked turns from comic relief into something quietly chilling.

These comments should not be interpreted as a recommendation to avoid the pilot episode.  Watching the pilot is necessary to understand the series’ setup.  The above description of using Web Chat screens as the medium for telling this story does not translate into static talking head images.  Instead, Lee and Tantimedh play with the space where the individual characters’ chat windows appear.  Of course when Skylar, Kel, or Kel’s on-again off-again girlfriend Camila (Jennifer Field) take center stage, their respective window fills the screen.  But when all three characters appear on screen, Camila’s chat window is at the bottom under Skylar’s and Kel’s windows.  That visual arrangement might be a natural function of Zoom technology.  Yet is it an accident that this screen placement occurs during the moment when Camila is busy undercutting Kel’s credibility?

Then again, Kel’s mission wasn’t as funny as it could have been.  The “being possessed by your future self to prevent a terrible future” bit comes out of “X-Men: Days Of Future Past.”  Turning Kel’s mission into an epic bit of comic frustration was intended to be achieved via giving Kel lots of foot-in-mouth moments.  But Skylar’s threat to punch Kel over the Internet (a great line btw) feels comically unearned.  The on screen pacing of Skylar and Kel’s conversation doesn’t match the script’s intent.  Or else if Xu showed Kel’s urgency running a little faster than his memories of what he was like as a person twenty years ago, this section could have worked.  Instead, what should have been the first episode’s comic highlight, Skylar’s erroneous conclusion about what’s really going on, falls flat.

But if the comic performances still needs some tinkering, the characters played by the “Comisery” actors seen so far feel fresh.  None of the characters fall into such stereotypical Hollywood character categories as the nerdy loser or the martial artist.  Trans nonbinary person Skylar speaks easily of threesomes, leather straps, and ball gags.  Kel, it’s hinted, has mental problems but it’s not a shameful secret.  Camila finds Kel’s more clingy aspects an emotional turnoff.  Mary’s a down-to-earth therapist rather than a font of obscure wisdom.  Most refreshingly, the series gives its Asian-American characters regular sex lives instead of pretending that it’s either non-existent or only with a white person.

Guessing what in-jokes, if any, exist in “Comisery” might be a mug’s game.  The closest might be Hill’s Mary grumbling about having to shelter in place in Hawaii.  Hill’s currently best known for her recurring role on “Magnum P.I.,” which happens to be set in Hawaii.  But Skylar’s name definitely isn’t a nod to the Zachary Quinto character from “Heroes.”  Nor has anybody made a Wolverine traveling into the past joke yet.  And it’s definitely a stretch to consider a development in the second episode a nod to the 1978 version of “Invasion Of The Body Snatchers.”  But the “seven hells” line in the first episode is definitely a “Game Of Thrones” reference.

More pedantic science fiction fans will understandably object to “Comisery”’s suggesting an alien virus has time travel capabilities.  But as the end of the second episode suggests, the disease may be a lot more than a simple bacterium.

It’s astonishing that Lee and Tantimedh managed to get “Comisery” off the ground in a literal couple of weeks.  If the results open up more career opportunities for the actors and creators involved with the series, that’s a good thing.  But the bigger accomplishment comes with the series providing a fresh Asian-American-centric story.

(All episodes of “Comisery” screen for free here.   New episodes drop every Monday.  Donations links to diversity-minded organizations will be available along with each new episode.)