Coming to our Planet Soon: No More Polar Bears! 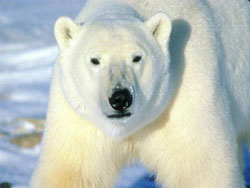 You’ve got to feel bad for the polar bear. The big hairy critter who thrives in the extreme cold is walking on thin ice these days.

Not only is his natural habitat literally melting away from under him, thanks to all those lovely cars we drive and the airplanes we take to hobnob with friends and relatives around the world, but the big guy’s also being pursued by rich hunters from the United States, Europe and Japan who think it’s a legitimate sport to slaughter him for trophy.

Humans are the only mammals on the planet who kill other living creatures for so-called fun and relaxation. Not to mention to hang their heads on the walls of their dens or use their skins as rugs or coats.

U.S. Government scientists are saying that by 2050 (which is only 43 years away), two-thirds of the polar bears in the world could be gone to that great ice cap in the sky. It doesn’t matter if every heat-trapping emission were stopped right this very moment. Or if every hunter on the planet suddenly found a conscience. Polar bears would still find their numbers decimated within a few decades. It’s inevitable, the experts say.

Surprisingly, the scientists didn’t make any recommendations as part of their year-long study. Not even to demand that polar bears be placed on an endangered species list, or that efforts be made to save the Arctic ice. Only in America would the so-called experts be such dupes of an administration that still refuses to acknowledge the effects that the energy-guzzling lifestyles of average Americans have on the planet.

At the same time that scientists were releasing their dire predictions, an inter-religious group was taking a jaunt via ocean liner to the coast of Greenland up near the Arctic Circle to pray for our planet’s survival. The group included Roman Catholics, Jews, Muslims, Hindus, Shintos and Zen Buddhists.

The trip may warm the hearts of the California woo-woo (New Age) crowd who believe in the power of positive vibes and thoughts, but the reality is that the ship they traveled on dumped vast amounts of pollution into the water, as all ocean vessels do. All that sewage; shower, sink and dishwasher water; and other waste material has to go somewhere.

The polar bear needs more than prayers. Perhaps if those religious folks had spent their time rallying their believers to the cause and getting them to lobby politicians, there would be a chance of saving a few of the ice-loving creatures.

As it is now, between the cowardly scientists, the thrill-seeking hunters and the woo-woo religious types, the polar bears may as well start making out their will.