Coming to a Theater Near You: The Football Concussion Crisis Documentaries 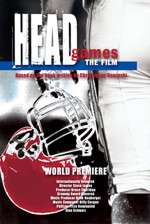 Ed. Note. Since submitting this article, Beyond Chron contributor Muchnick has exposed on his own blog that the Head Games film was underwritten by Chicago billionaire music and technology entrepreneur Steve Devick, and is a promotional vehicle for his King-Devick sideline concussion test, which is in development.

There are a good half-dozen documentaries about the football concussion crisis in various stages of development. One deservedly getting a lot of attention is Sean Pamphilon’s United States of Football. Pamphilon is the guy with video busting the New Orleans Saints’ former “Bountygate” defensive coordinator, Gregg Williams.

But the first doc out of the gate is Head Games by director Steve James, the maker of Hoop Dreams, arguably the greatest nonfiction sports film of all time. The first of three private screenings this spring will take place Tuesday night in Chicago. The trailer can be viewed at http://www.headgamesthefilm.com.

The film’s website just changed the description of the preview screenings from “red-carpet premieres” to “private sneak peeks.” It is fair to surmise that this change was prompted, at least in part, by my reporting on the James team’s funding and on the controversial role of Alan Schwarz, whose reporting on the concussion issue for the New York Times irrevocably elevated it in the national conversation.

I am disappointed by the trailer, which seems more like a full-length infomercial for Boston University’s Center for the Study of Chronic Traumatic Encephelopathy than an aggressive examination of the untenable public health costs wrought by the National Football League, the $10-billion-a-year corporation ruling over America’s most popular sport.

At this point we need forward-looking investigations and hard-hitting solutions much more than we need further encomiums for the Schwarz-Chris Nowinski-Dr. Robert Cantu Northeast triumvirate of media, advocacy, and NFL-supported research. And judgments about the content aside, Head Games does not appear to have the narrative dynamics of Hoop Dreams, which followed the careers and lives of particular athletes over time.

You can’t judge a book by its cover or a feature film by its two-minute trailer, and my harsh pre-assessment may be proven to have missed the mark. James told me, “We are still not quite done with the film despite these screenings… That’s why they’re private affairs in part with institutions that were very cooperative in helping us make the film. Secondly, we are figuring out the release strategy for the film – whether that includes festivals, etc. It’s all truly in flux.”

I don’t mean to put words in James’ mouth, but it’s even possible that he realizes this documentary was designed to be a hit-and-run single to right, not a big fly. I can easily see Head Games landing on ESPN, which has a monster partnership with the NFL yet wants to put out some decent information and come off as proactive.

Meanwhile, back at the journalistic ranch, what’s going on with the New York Times and the concussion crisis? Schwarz left that beat last summer but continues to dabble in it, in addition to writing about education and other subjects.

Schwarz told me Times management had cleared him to work on the Head Games documentary and be billed as its associate producer.

James stated that the film’s anonymous funders do not include the Times, Nowinski and Cantu’s Sports Legacy Institute or Center for the Study of CTE, or “any sports league.”

“Staff members offered consulting agreements by agents, producers, studios or others must consult the standards editor or the deputy editorial page editor before accepting,” Murphy said. “No staff member may serve as a consultant to a film or program that he or she knows in advance is tendentious or clearly distorts the underlying facts. In no case should a consulting role be described in a way that invokes The Times or implies its endorsement or participation.”

Asked why the Times did not disclose Schwarz’s film project to readers when it published his recent report on the Dave Duerson family’s lawsuit against the NFL, Murphy said, “If a note to readers was determined to be necessary, one would have been made. We’re not commenting further on this.”

Irvin Muchnick asks, “Can we all start at least agreeing that 6-year-olds should be playing flag football?” More at his website http://concussioninc.net. An updated digital edition of his 2009 book, CHRIS & NANCY: The True Story of the Benoit Murder-Suicide and Pro Wrestling’s Cocktail of Death, will be published this summer.