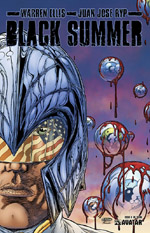 Superheroes traditionally “fight crime” and “don’t kill.” What can a superhero do, though, when the powerful criminal organization in question is a Bush-Cheney style White House? John Horus, member of the superhero group “The Seven Guns,” dramatically answers this query on the eve of Independence Day. To give a political second chance to America, he kills the President, Vice-President, and several trusted advisors and nationally announces his deed. The ramifications of these killings launch Warren Ellis & Juan Jose Ryp’s sure to be controversial graphic mini-series “Black Summer.”

Ellis is not a stranger to the art of boldly kicking the flabby bodies of pop culture standards in their genre-flattened arses. “Fell’s Bloodline” descends from the detective story standard of cop as secular confessor/witness of humanity’s sins. Ellis’ handling of the theme eschews typical “unhappy lives of the rich and the beautiful” titillation. Instead, readers are continually disturbed by slightly fictionalized bits of mundane urban madness ( e.g. poisoning through liquid feces injections).

A special species of dark curiosity runs through Ellis’ best works. Incredibly unsettling follow-throughs on ideas get balanced by jealousy-inducing storytelling elan. “Transmetropolitan,” “Scars,” and “Desolation Jones” have cemented Ellis’ reputation as one of the top-tier writers working in the graphic narrative field.

These past successes make Ellis qualified to deliver the Buddha palm strike long needed by the moribund body of the superhero genre. This first chapter of “Black Summer” fulfills that promise.

John Horus’ unapologetic assassination forces his surviving “Seven Guns” teammates and even the reader to eventually decide on their response to Horus’ actions. In Ellis’ less ruthless scenario (compared to the tactics of England’s SAS), U.S. police and military forces have committed themselves to exterminate any and all members of the possibly rogue superhero team. People who remember the death of Black Panther Fred Hampton may beg to differ.

Ellis’ darkly droll essay demonstrates the careful thought behind his fictional scenario. Teases of art samples promise future action sequences violent enough to satisfy both the superhero fan base and the average Hollywood blockbuster fan. But “Black Summer”‘s most arresting image remains the wet blood literally dripping off Horus’ hands as he makes his national public address. Readers who can be entertained by one of the “Another Hole In The Head” festival’s zombie mutilation films will not consider “Black Summer” too extreme.

Smoking- and alcohol-sensitive readers may be repelled by Tom Noir’s heavy indulgence in same. Too bad. There are hints that Noir will fit in Ellis’ story telling convention of having the heavy smoker and/or drinker be his story’s moral or ethical center (e.g. Spider Jerusalem, Jenny Sparks).

“Black Summer” does not identify the slain President and Vice-President. Should Ellis have done so? The story begins on Independence Day Eve 2006. Illegality of an Iraq war, torture approved by elected authorities, and elections stolen by presidential administration are criminal activities associated with the Bush Administration.

Ellis wants readers to think beyond Bush and self-examine their tolerance level for extra-legal actions. If one accepts the activities of a Batman, can one also decry an Abu Ghraib?

John Horus holds a White House press conference after killing the President and the Vice-President.

How would anti-violence leftists handle “Black Summer”‘s scenario? Granted, they consider Horus’ actions violent and reprehensible. What if impeachment is a non-starter thanks to the corrupt administration’s Congressional enablers? When one’s strongest legal weapon is unavailable, it seems immoral to simply pray the current administration does nothing further to screw up this country. For progressives seeking to claim the moral high ground, pretty rhetoric must eventually yield to grimy discussions of practical problem solving.

Political questions aside, “Black Summer” satisfies as an entertainment artifact. Ellis’ dialogue enthrallingly melds information conveyance with dredging up old disagreements and lost idealism. Bitter present day drunk Tom Noir is no longer the dreamer of enhanced human senses which could detect at a particular moment how many cell phone text messages are being sent out of a large room.

A subtle scheme dominates the panel layout and pacing used to tell the events of “Black Summer.” The pattern of strict number of panels on many pages creates a sense of imprisoning inevitability.

Now that the first deaths have occurred, will Horus’ killings give America a chance to regain its political freedom? What if the entire American political system is corrupt? Would Horus need a new rationale to justify further killings? If so, “where do you draw the line”? How Ellis and Ryp answer that question may provide some very thoughtful graphic reading.