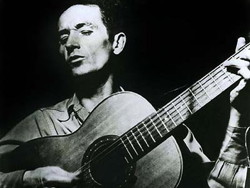 I suspect that I was not the only teenager in the late 1960s engaging in sex, drugs, rock and roll, and Vietnam War protests to whom Woody’s body of work had an antique feeling. A perfunctory one-time listening to the Alan Lomax tapes of the man said to be one of Bob Dylan’s heroes was enough, I thought, to punch my hipness card. Arguments about unions and the venality of millionaires and the New Deal seemed like passé accounts of battles my parents’ generation had fought and won. Yet through the mysterious alchemy that the greatest works of art possess, and the bizarre devolution of American politics, many of Guthrie’s songs are paradoxically more relevant today that at the time of his passing in 1967.

Other than animus toward the Koch Brothers and their ilk, admiration for Woody Guthrie may be one of the very few things that the Obama administration and Occupy Wall Street agree about. “This Land Is Your Land” was performed by Bruce Springsteen and Pete Seeger at Obama’s inauguration in 2009, and by Tom Morello leading a “guitar army” at the OWS rally on May Day of this year in New York’s Union Square.

On the weekend in mid-July of Guthrie’s 100th birthday, President Obama told Charlie Rose that “the nature of this office is also to tell a story to the American people that gives them a sense of unity and purpose and optimism, especially during tough times,” and admitted he had failed to do so. Around the same time several dozen of the activists who had helped launch OWS met in Washington Square Park, where Guthrie had sung on many an occasion, to discuss what to do in the fall on the impending one year anniversary of the occupation. Their moral compass was intact but it was clear that the explosion of attention and activism last fall had not been the product of any one person, group, philosophy, or strategy—and that even the sharpest movement intellects weren’t sure about how to hit another home run. Should the focus be on college debt? Credit cards? Public financing of campaigns? Foreclosures? Should there be a campaign to have people wear red to symbolize how many Americans are “in the red?”

As both the liberal establishment and the various pieces of the Occupy movement searched for lost chords that could galvanize mass opinion around economic issues, the unique value of great art and great artists loomed large. It was not just Obama who has to figure out how to “tell a story”—it was the entire Left.

As it happens, the fierce debate about the nature of community and government that is animating so much of modern American politics echoes one taking place just as vigorously more than seventy years ago, when Guthrie wrote his most influential songs, long before cellphones or television, before hip-hop or rock and roll, before hipsters or punks or hippies or beatniks, before Pearl Harbor, before McCarthyism, before gay rights or second-wave feminism, and before Jackie Robinson played his first major league ball game. And the reason Guthrie’s work is remembered, while that of his contemporaries is largely forgotten, is not only because of his genius for memorable phrases. Most of Guthrie’s political songs spoke not solely to transient issues of the day but to fundamental moral ideals about how people and societies should and should not behave.

IN HER new book, My Name Is New York: Ramblin’ Around Woody Guthrie’s Town (Powerhouse Books), Nora Guthrie, who like me was born in 1950, writes of her father’s journey to New York City in early 1940 at the age of twenty-seven. “During the month it took to hitchhike from Los Angeles to New York, ‘God Bless America’ was blaring out of every jukebox and radio across the country.” (The recording is still played during the seventh inning stretch at Yankee Stadium.)

Woody felt that Irving Berlin’s patriotic anthem was incomplete. As Woody’s original hand-written lyrics reprinted in Nora’s book show, “This Land Was Made for You and Me” (now known as “This Land Is Your Land”) was first written as “God Blessed America,” and the original refrain was “God blessed America for me.” The song balances his admiration, shared with Berlin, for the natural beauty of the American continent (“the sparkling sands of the diamond deserts”) with an acknowledgement of the dark side of American capitalism (“One bright sunny morning, in the shadow of the steeple, by the relief office, I saw my people. As they stood hungry, I stood there wondering if God blessed America for me.”) In the final version, Woody’s finely tuned artistic ear changed the last line to say that America “was made for you and me.” Pete Seeger’s 1967 obituary of Woody in Life pointed out that “any damn fool can get complicated. It takes a genius to attain simplicity.”

“This Land Was Made for You and Me” was written on February 23, 1940 at the Hanover Rooming House on West 43rd Street, which ironically is now the site of the world headquarters of Bank of America. In the months that followed Guthrie would write many other lyrics about the dignity and value of working people—of those who would later be called “the 99 percent”—including “Jesus Christ,” “Pastures of Plenty,” and “Tom Joad,” the latter inspired by John Steinbeck’s novel The Grapes of Wrath. (John Ford would win the Academy Award for Best Director that year for the film version.)

At exactly the same time, Ayn Rand, seven years older than Woody, was finishing her benzedrine-fueled novel The Fountainhead, which artistically expressed a philosophy completely obverse to Woody’s. The Fountainhead, published in 1943, was followed by Rand’s nonfiction screed The Moral Basis Of Individualism, which advocated “rational and ethical egoism” and rejected “ethical altruism.”

In the ensuing decades the beneficiaries of Randian philosophy have made vast investments in changing American public opinion and politics, fanning the flames of McCarthyism, then Reaganism, and now the naked corporatism that some OWS members astutely call “mafia capitalism.” Longtime Fed Chairman Alan Greenspan was an actual acolyte of Rand, and Wisconsin Congressman Paul Ryan, whose plan to dismantle most of America’s social safety net has been supported by virtually all of the conservative establishment, proudly described “growing up on Ayn Rand,” at least until her atheism began to threaten his public image.

There can be little question that Guthrie would be appalled by the corporatization of the Democratic Party. He was an unapologetic left-winger who wrote a column called “Woody Sez” for the Communist Daily Worker (though he pointedly never joined the Communist Party, and referred to himself as a “commonist.”) His very first column is eerily resonant today:

But though significantly to the left of the Democratic Party even in its New Deal phase, Guthrie had none of the contemporary anarchist propensity (shared by some others on the left) for treating all politicians as if they were the same. In the song “Dear Mrs. Roosevelt,” written after FDR died, Guthrie sang:

Nor did Guthrie’s pre-psychedelic lefty morality have much to do with the libertarian political current, which owes much to Ayn Rand but also holds a lot of sway on parts of the Left. He may have wanted cops to leave deportees and hobos alone (in today’s parlance, to stop “stop and frisk”). But it is reasonable to assume he wanted FDR’s government to police the bankers he described in “Pretty Boy Floyd,” who “robbed you with a fountain pen” and “drove a family from their home.”

Although Woody was unblinking in the face of suffering and injustice, he had a persistent streak of optimism. He seemed really to believe that music could change the world for the better, confidently writing on his guitar, “This machine kills fascists.” He could describe the deprivations of migrant workers but still insist that “pastures of plenty must always be free.”

When right-wing demagogues ranted that President Obama was a socialist, the liberal response was to deny it. Many Woody fans assuredly wished that those in the political conversation, including in this magazine, would add the word “unfortunately.” Woody’s political songs, of course, were animated by clear ideas about what is right or wrong, not precise political arguments. Nothing in his canon would suggest that phrases appealing to focus groups of swing voters, or slogans that temporarily capture the imagination of general assemblies, should be at the heart of progressive politics.

During hard times, people who are struggling look for an emotionally accessible moral philosophy that can give them hope. If the Left does not provide it, the Right is always there to fill the vacuum. One need only to observe a forlorn thirty-something clutching a paperback copy of The Fountainhead to identify with the yearning of Steve Earle’s 1997 song “Christmas In Washington,” which like Woody’s own songs seems both timeless and of the moment:

Come back Woody Guthrie
Come back to us now.
Tear your eyes from paradise
And rise again somehow.

Danny Goldberg is President of GoldVE Entertainment, which manages the careers of Steve Earle and Tom Morello among others, and is the author of the books Bumping Into Geniuses and How The Left Lost Teen Spirit. This piece was first published in Dissent Magazine.