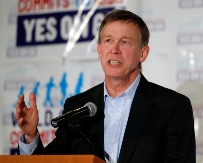 I have read “analysis” that says that the rejection of Amendment 66 in Colorado on November 5 means that the state is too conservative to back tax increases. I know nothing about how the provisions of the amendment were drawn up, but it did call for a tax increase for everybody who pays income taxes to the state of Colorado. At present, people pay a flat 4.63% tax in Colorado. Amendment 66 called for a two-tiered increase:

So everybody would get hit with an increase. For all but the 1%, the economy has been in nonstop recession since 2008. Only those at the top as a group have had their pay increase since then. Overwhelmingly the experience of everyone else is that they have either lost jobs and/or had to swallow cuts in pay. Of course they do not want to tax themselves more.

Most polls show that the public will back tax increases on the rich. Here are two links to such polls. The first poll is from 2011 and the second is from 2012:

If the Colorado tax increase had been only on the rich, instead of on everybody, the likelihood of passage would have been much greater. Let’s hope this point is not lost when other states consider such measures.