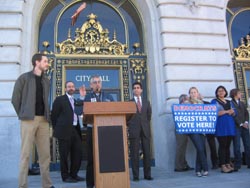 Labor activists, environmentalists and the San Francisco Democratic Party held a City Hall rally yesterday to kick off the campaign to defeat Propositions 94-97 on the February ballot. After Governor Schwarzenegger and Assembly Speaker Fabian Nunez pushed through contracts with four Native American tribes to allow for casinos on their land, UNITE-HERE gathered signatures to put the gaming compacts on the ballot – so that voters can repeal them. These compacts are a giveaway to the wealthiest Indian tribes in the state, without demanding that they respect basic California labor law for casino employees, or environmental law. Unlike other gaming compacts, it does not help the more impoverished tribes benefit from casino revenue and does nothing to fund public schools. By defeating Props 94 to 97, California voters will have the chance to repeal these four gaming compacts – and send the state back to the drawing board.

“The Democratic Party is the party of working people,” said Scott Wiener, chair of the San Francisco Democratic County Central Committee. “Defeating these 4 compacts will be our top priority this election. We will send the Governor back to the drawing board, and draft gaming compacts that respect working men and women.”

The compacts would allow four of the wealthiest Indian tribes – Pechanga, Morongo, Agua Caliente and Sycuan – to operate an additional 17,000 slot machines in California, or the equivalent of 12 large Las Vegas casinos. Because Native American tribal lands are their own sovereign nation, they are not subject to California state labor laws – but most Indian gaming compacts approved in the past have allowed for such protections. In this case, Governor Schwarzenegger did not demand it.

“I voted ‘no’ in the State Assembly when these compacts came up for a vote,” said Assemblyman Mark Leno, as the legislature ratified the 4 treaties. “There were no labor protections, and it was drafted by a non-labor friendly Governor. There was also no revenue-sharing agreement with the impoverished Indian tribes, and no environmental protections either.” Assemblywoman Fiona Ma likewise opposed the compacts, as did Senators Carole Migden and Leland Yee.

But Arnold could not have passed these anti-labor contracts without the active help of Speaker Fabian Nunez – who did so for all the wrong reasons. Nunez hopes that voters will pass Proposition 93 (the term limits measure) to extend his tenure in office, but the four tribes threatened to throw money behind the “No on 93” effort if he didn’t support their gaming compacts.

In other words, Nunez cut a deal with the Indian tribes that betrayed working people, the environment, and impoverished tribes – just so he’d have an easier time staying in office longer. The former labor organizer chose to put his own political career and influence in Sacramento – ahead of the basic values that Democrats (and Nunez himself) say they support. Now these constituencies will mobilize for the February ballot to defeat Props 94-97, while it is now less likely they will support Prop 93.

How bad were these gaming compacts? Under the terms, even CEQA – the Calif. Environmental Quality Act, which guides all land use decisions in the state to prevent runaway development – would not apply to the sovereign tribes. “These tribes are sovereign,” said Livable City Director Tom Radulovich, “but it doesn’t absolve their responsibility to care for their workers and respect the environment. Things like air and water don’t respect the environment.”

Like any effort at promoting legalized gambling, the Native American tribes have claimed that revenue from the casino compacts will help fund education. But nothing could be further from the truth. “Not one penny is guaranteed for schools,” said School Board member Eric Mar. “These compacts let the four tribes off the hook.”

“These compacts will devastate small tribal operations in California who are left out,” said Jack Gribbon of UNITE-HERE, the hotel workers union that gathered signatures to put Props 94-97 on the ballot. UNITE-HERE had tried organizing workers at the Indian casinos, but management actively resisted all such efforts. With the rights of casino workers in jeopardy due to this compact, Gribbon and his union have made the defeat of Props 94-97 their top priority for February.

Hopefully, the voters will join them in defeating these compacts.