Co-opting Accomplishments, One Press Conference at a Time 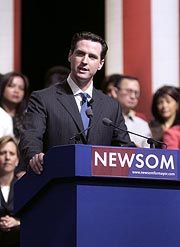 There’s nothing wrong with politicians announcing their achievements. In fact, it’s an important and necessary way to inform the public of the often times unnoticed work that they do. But when an elected official takes credit for accomplishments they took little or no part in, it’s a tremendous disservice to the people who actually did the work. Through his endless PR campaign of press conferences and program launches, Mayor Gavin Newsom has proven remarkably adept at this sort of co-optation, with the Chronicle complicit throughout. This media operation, while impressive, does a disservice to San Franciscans who choose to involve themselves with the way their city runs.

District 5 represents a case study in Newsom’s co-opting strategies. Beyond Chron readers may remember several months ago our reporting on the Marcus Garvey/MLK housing project. Tenants in the building faced eviction due to months of operating in the red and substandard conditions.

These tenants, along with Supervisor Ross Mirkarimi, began negotiations with Housing and Urban Development (HUD) to work out a compromise solution. The issue soon developed into a front-burner issue for Mirkarimi, one that he refused to communicate with the media about because he felt it could harm the negotiating process.

Newsom, however, did not feel the same reluctance to contact the press. The situation received no media attention until the Mayor wrote a letter to HUD making unrealistic demands and almost ruining the negotiating process.

The result? An article in the Chronicle giving Newsom credit for trying to ‘save’ the Marcus Garvey/MLK tenants, despite his negative role in the process and the fact that tenants and Mirkarimi did the lion’s share of the work towards reaching a solution.

A similar situation exists surrounding the recent debate over how to decrease violence in the Western Addition. Despite a recent press conference at which Newsom announced a drop in crime citywide, murder rates continue to rise in the housing projects around Fillmore Street.

Western Addition residents and leaders convened a series of community meetings over the past few months to discuss ways to stop the violence sweeping their neighborhood. Soon after they developed some strategies for problem, including more community policing, Newsom rushed in to ‘join forces’ with Mirkarimi to help solve the problem. The Mayor helped announce policing plans for the area that included several of the same ideas developed by the D5 Supe and community members.

Another recent and egregious example of the Mayor’s strategy of co-option involves his recent housing initiative, in which he revealed his plans to take credit for thousands of units of housing he obstructed the completion of. These units will be built at Rincon Hill, Trinity Plaza and Transbay Terminal, and will all serve to help the Mayor fulfill his promise to add 15,000 new units of housing to San Francisco’s supply.

Beyond the blatant insult this all represents to Supervisor Chris Daly, who played major roles in brokering all three projects, it’s a slap in the face to the community activists and tenants who worked so hard to make these units a reality.

The tenants of Trinity Plaza, for example, spent more than two years fighting the demolition of their homes. They organized themselves, held protests, lobbied politicians, and obtained thousands of signatures for an anti-demolition ballot initiative, all while working under extreme duress. Newsom played an integral role in raising their stress levels even higher by vetoing a proposal to stop the demolition of the building.

Their fighting ultimately paid off, leading to the right to homes in the new Trinity Plaza development, along with a massive chunk of affordable housing for other low-income San Franciscans. Yet listening to Gavin Newsom, it was all his doing, and he appears to show no shame in claiming credit for their sweat and tears.

Other examples of this behavior include Newsom’s recent press conference congratulating neighborhoods for their newly formed Community Benefits Districts (CBDs). While the congratulations are nice, the entire process came about due to the work of Supervisor Aaron Peskin and the hard work of the communities in which they were created.

Newsom also took credit for much of the recent pot club legislation, which he had little to do with, as well as a recent jump in funding for schools – funding obtained primarily as a result of Supervisor Tom Ammiano’s legislation and the support of teachers throughout the city.

The fact that this strategy pumps up Newsom’s approval rating without him doing any work is bad enough. But the truly harmful aspect of it involves the denigration of communities and Supervisors who work day in and day out to improve their city.

Few people get involved in civic life – it demands the devotion of precious spare time and guaranteed conflict with others. Those who do deserve the utmost respect and encouragement, not the co-option of their efforts. Doing the latter only encourages complacency, creating an illusion that the Mayor is taking care of everything so there’s no need to get involved. And even if one did, accomplishments would go unrewarded.

If Newsom really wants to prove the city is improving under his watch, he should let communities trumpet their own accomplishments. He should spend more days in his office at work rather than attending media event after media event. And he should develop substantive strategies for improving the city, rather than offering media-oriented goals and using the hard work of others to achieve them.