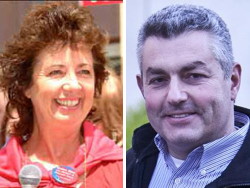 Going public with longstanding concerns about SEIU-UHW’s partnership with the hospital industry, California Nurses Association leader RoseAnn DeMoro called SEIU-UHW head Dave Regan “overtly disgraceful” and “an enormous embarrassment to the labor movement” in a June 14 email. DeMoro is angry at Regan and SEIU for backing the California Hospital Association’s efforts to rollback nursing staffing ratios. Describing these ratios as a “life and death issue,” DeMoro called Regan’s arguments on the hospital’s behalf “idiotic.” The California Federation of Labor agreed, defeating Regan’s proposal 60-2. This battle between CNA and SEIU-UHW over the latter’s joining the hospital industry’s attacks on workers—a struggle DeMoro describes as a “war”– follows a leaked memo detailing SEIU Local 1021 leaders denouncing Regan’s San Francisco political agenda. But while labor activists fume, Regan’s claim that the nurses are “undermining efforts” to protect lower-paid hospital workers will no doubt be widely promoted by backers of a November ballot measure to defund union political activities.

As “Queen Meg” Whitman learned in the 2010 governor’s race, it’s not a good idea to get in a war with RoseAnn DeMoro. So it says a lot that SEIU-UHW’s Dave Regan would invite such a war by partnering with hospitals against the nurses on CNA’s priority issue: nurse to patient staffing ratios.

Regan’s strategic alliance with major hospitals reflects SEIU-UHW’s vision for labor’s future. It also shows that Regan is willing to ignore the views of the rest of the labor movement and even SEIU’s own dues paying members in partnering with major hospital chains. After all, SEIU Locals 121, 721, 521, 1021 and 221 represent 16,000 nurses, so that SEIU at the state level is siding with hospitals against the nurses in its own membership.

For more information about Regan’s anti-worker agenda, read the memo linked above and see the low opinion SEIU Local 1021 officials have of their UHW colleague.

“I was in the call with the state federation of labor tonight. The reason that the call was so important is that thus far, they and the hospital association, have not been able to garner a single sponsor to go after the ratio bill. But SEIU apparently cut a deal with some legislators that if they could get organized labor to support them, that they would be willing to consider carrying this bill. All day long, the GR staff, Bonnie Stephanie and Deanne (great job) and some of us worked to make sure that they could get no votes. SEIU had a full court press calling and threatening everyone. I kept hearing that we could lose this.

When we got on the call, Dave Regan (the guy who took Sal’s local) made an impassioned speech on behalf of the CA hospital association and told the 60 plus members of the board that the hospitals need to have these cuts because everyone needs to share the sacrifice. He went on with his drivel about how the low wage workers are taking cuts because the RN’s are so privileged and do not take cuts so they make the low wage workers suffer. And the poor poor hospital industry.”

Remember when former Governor Arnold Schwarzenegger held a special election in 2005 and the nurses led the drive to successfully defeat every one of his measures? That was after Arnold said he would “kick the nurses butts” on the staffing ratio issue.

Now we have the head of SEIU-UHW joining these attacks on nurses. Including 16,000 nurses that SEIU represents.

There was a deal cut last week with the hospitals and SEIU’s Regan where he would be their advocate. This was their first priority which shows you how high up on the list this is. They have a full blown campaign including some press work with some hits coming on our Ratios and the CNA.

DeMoro made a motion before the California Federation of Labor, AFL-CIO to kill Regan’s proposal for the AFL-CIO to align with major hospitals against unionized nurses. It passed 60-2 (the two votes came from SEIU-UHW and SEIU Local 1877). The nurses’ leader noted “it was humiliating to him undoubtedly if he had any principles, which I question. “

These aren’t the Koch brothers leading the campaign against nurses; it’s SEIU. And keep in mind that
As DeMoro put it, Regan “is the hospital’s association toddie and he does it in the name of low wage workers. What a disgrace.”

Can Labor Unify for November?

California unions and the entire progressive community face a major challenge in defeating a corporate-backed ballot measure in November that would effectively prevent unions from spending money on elections. Voters have previously rejected a similar “Paycheck Protection Initiative,” but this measure is billed as “campaign finance reform” and will be backed by a truckload of conservative money that has nowhere else to go in California this November (Obama is far ahead in the state).

California labor is unified—except for the fact that one of it largest unions, SEIU-UHW, is involved in fights across the state with NUHW and has now decided to take on the California Nurses Association. DeMoro’s union entered into a peace treaty with SEIU in 2009, but regardless of its formal expiration date, it’s clear from her comments above that CNA and SEIU-UHW will not be working together anytime soon.

In response to DeMoro’s charges (which she later echoed in a press release), Regan issued a statement: “At a time of economic crisis, when everyone is being asked to sacrifice and contribute to the solution, the CNA’s position is essentially to accept the $400 million cut to safety net hospitals, but protect only RNs from its impact. In other words, they believe the cuts should fall on lower-paid service, tech, maintenance, clerical and other workers. This would include the loss of hundreds, if not thousands of jobs.”

While Regan’s charges have no credibility in the labor movement, to have a top state union leader claiming that the nurses union is selfish and does not care about lower-paid workers provides cannon fodder for labor’s enemies. Expect radio and television ads for the anti-union political campaign to cite Regan’s words to the effect that even fellow union “bosses” agree that union political clout is out of control.

Dave Regan is the proverbial “5th Column” in California labor. He has battled UNITE HERE, SEIU Local 1021, NUHW and now CNA on behalf of a vision that the rest of the labor movement rejects.

DeMoro urged all nurses to be on “high alert” in response to Regan’s treachery. She stated in an email distributed to nurses, “I am very concerned that everyone with SEIU take caution with respect to Dave Regan’s lieutenants in your facilities. He will undoubtedly use his rank and file to spy on nurses for the hospitals to try to weaken RN power at the work place, to set up nurses in ways that I would like for you to consider – especially as he makes his case why nurses don’t need ratios. I don’t think that I am being overly cautious.

National SEIU President Mary Kay Henry’s passivity in response to Regan’s shenanigans is remarkable. If she believes silence is the best way to get him to change course, she’s been proven wrong time and again. Henry’s passivity empowers Regan and is undermining SEIU in California.

Fortunately, nobody has ever accused DeMoro of passivity. And it may be that Regan’s attacks on her will finally lead to his downfall. DeMoro made her position toward SEIU-UHW clear: “It is a war, of that I am certain, and it will not be pretty.”

DeMoro and the nurses took down Meg Whitman and Arnold Schwarzenegger. They can do another great service to the labor movement by taking down Regan and SEIU-UHW as credible voices for workers, restoring labor unity heading toward November.