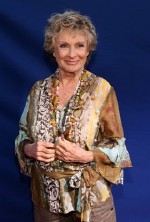 Cloris Leachman — actress, performer, Academy Award winner at 84 years old is still the trendster, dandy and hipster that she has always been. This is new way to start off an interview. Before I got to ask one question, the star starts to recite a Sonnet from Elizabeth Barrett Browning. I think it went on for at least four minutes. Then, I kinda got control of the interview.

But first, here is a little background. She was born in Des Moines, Iowa. She was a classmate of hilarious actor Paul Lynde in Drama at Northwestern University and Illinois State University. Leachman began a TV career, shortly after competing in the Miss America contest as Miss Chicago in 1946.

Over the years, she has appeared in hundreds of plays, shows, movies, one woman shows, events and very recently she was a big favorite of the Judges on “Dancing with the Stars.” She was 83 years old at the time. Would she do it again? I asked. –“Oh, in a minute”, she exclaimed. “I had such a wonderful, fun time on that show.” But didn’t you find that the training backstage stressful? – “Not at all. We just had a fabulous time – joking back and forth. For me it was just a big wonderful laugh-fest.”

You were in some Mel Brooks films. In ‘Young Frankenstein’ (1974). And you played a character in “High Anxiety” as the demented nurse Charlotte Diesel. Sounds like a good name for a Drag Queen, I said. — “Oh, that’s funny.” She really had a good laugh over that.

I asked Leachman about something that I have heard repeated over the years. Is it true that when you auditioned to revive your role in “Young Frankenstein” in the Broadway Production of the musical, that Mel Brooks told Columnist Army Archerd that you were too old for the role – Brooks reportedly said: “We don’t want her to die on the stage!”

“First of all – it wasn’t an audition. It was a meeting. And we did agree that I might be a little old to reprise the same role that I did in the movie.” However – later on Brooks did ask Leachman to reprise her role as Frau Blucher. But the production closed before that could be realized.

I am curious about your one-woman show at the Rrazz Room. –“I don’t want to say too much about it, except that it is a wonderful show. I took a look at the Rrazz Room – and it seems to be the perfect place for me to launch the show.” Will you sing in the show? – “A little.”

Cloris. If you could have a super power – what would that be? –“To speak every language on Earth.” Do you have a favorite Comic character? –“Yes, the Dog Marmaduke, and Peony.” What color is your umbrella? “Which one? I have two.” Well, what colors are they? –“They are both Beige.”

What is the highlight of your long career? I would think that it would be your fabulous role in “The Last Picture Show” which you got an Oscar for. — “Well, yes it was certainly a big highlight of my career. Bogdonovich said to me after the movie ‘wrapped’ – ‘You’re going to win an Oscar’ – and he was right.”

Betty White and you have re-invented yourselves over the years. You’re both like the Energizer Bunny – maybe you two should put a new TV Show on called “We’re Still Here” or “The Retro Girls.” –“Oh, it’s so funny that you say that. You must be psychic. Any minute they will release a new movie called “You Again” starring Betty White and myself. Do you like the title “You Again?” I think it’s cute? I also have another movie that will be released soon. It’s called “The Fields.” Wow! And how do you do it? Don’t you ever get tired? “No!”

TONIGHT: BERNADETTO/BLESSED – Jazz singer Russ Lorenson currently is performing a tribute to Tony Bennett at the Eureka theater. He will be joined by Linda Kosut, and Chuck Gee & Friends.

AlSO ANOTHER CHANCE to see Russ Lorenson at the benefit “Sunset Cruise for Tenderloin Health” to help to provide health services to the homeless and residents of the Tenderloin. This is the 20th Anniversary for this event. It all happens of Thurs. June 17 from 5:45 – to 9PM. Where: Pier 40, South Beach Harbor, San Francisco. Tix and sponsorships info: 415-437-2900 Ext. 104. It’s a worthy cause – and one that sounds just fab.