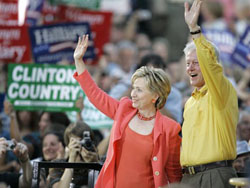 In denying her longtime support for NAFTA, Hillary Clinton has again re-imagined her past to escape political accountability. Fittingly, this latest episode has emerged in Ohio, which lost thousands of jobs following NAFTA’s passage, an impact that opponents predicted and that the Clinton Administration denied. Hillary Clinton’s retroactive opposition to NAFTA parallels an earlier Clinton betrayal of the state’s residents. In The Activist’s Handbook, I describe how Bill Clinton promised during his 1992 campaign to close the East Liverpool, Ohio waste incinerator, but suddenly “forgot” all about this commitment after taking office. The failure of national environmentalist groups to loudly protest Clinton’s issuance of incinerator permits encouraged future betrayals, creating an unfortunate dynamic that allowed Clinton to avoid political accountability and move further to the right. The dispute between Clinton and Barack Obama over NAFTA also has broader implications, raising larger questions about Democrats who campaign as populists while voting the corporate line.

I wrote back on January 14 that Hillary Clinton was running on a re-imagined personal history, one where she fought for the poor for 35 years rather than her actual life representing Wal-Mart and other corporations as an attorney for Arkansas’ most powerful law firm. Now Clinton has rub smack against her past in Ohio, whose residents were victimized by a NAFTA that her husband passed and she has long praised.

NAFTA was the most hotly contested internal Democratic fight of the Clinton Administration. It pitted organized labor and the Party’s progressive wing against President Clinton and the pro-business Democratic Leadership Council.

Bill Clinton used every political chit at his disposal to strong-arm NAFTA through a Democratic-controlled Congress. But NAFTA’s passage so disillusioned the Democratic base that voters stayed home in the 1994 midterm elections, paving the way for the Republican takeover of the House and Newt Gingrich’s “Contract With America.”

NAFTA was a classic case of “Which Side Are You On”? Hillary Clinton took the same side as her husband, and praised NAFTA until she realized that it would hurt her presidential primary prospects in Ohio and other states.

That’s why Clinton’s attacks on Obama for publicizing her pro-NAFTA stance is so revealing. Having reaped corporate campaign contributions and endorsements by backing NAFTA, Clinton now wants that portion of her life history erased.

There is a pattern here. While Barack Obama charged Clinton with picking and choosing among parts of her life history, what Hillary is actually doing is seeking to avoid political accountability by retroactively changing her views.

Clinton’s reinvention of her prior support of NAFTA is much different from a politician that, based on new evidence, changes their mind. For example, Robert Reich, who lobbied feverishly for NAFTA as Clinton’s Labor Secretary, acknowledged years ago that the agreement did not work as planned. Paul Krugman of the New York Times has gone from a free trade fanatic to quite skeptical of such agreements.

But Hillary Clinton did not waver in her support for the job-killing NAFTA until mounting her presidential campaign. Consider:

* In 1998, the Buffalo News reported that Clinton attended the World Economic Forum in Davos, Switzerland, and praised corporations for mounting “a very effective business effort in the U.S. on behalf of NAFTA.”

* On November 1, 1996, United Press International reported that on a trip to Brownsville, Texas, Clinton “touted the president’s support for the North American Free Trade Agreement, saying it would reap widespread benefits in the region.”

* The Associated Press reported the next day that Hillary Clinton touted the fact that “the president would continue to support economic growth in South Texas through initiatives such as the North American Free Trade Agreement.”

* In her memoir, Clinton wrote, “Senator Dole was genuinely interested in health care reform but wanted to run for President in 1996. He couldn’t hand incumbent Bill Clinton any more legislative victories, particularly after Bill’s successes on the budget, the Brady Bill and NAFTA.”

Some argue that it is irrelevant that Hillary Clinton long supported a trade agreement that eliminated hundreds of thousands of blue-collar jobs, since she is now publicly committed to opposing such agreements. This position is understandable.

But it is quite another matter to now argue that Hillary has long sought changes in NAFTA, when the record is quite the opposite.

Hillary’s re-inventions seek to deprive progressives of their only means of keeping politicians accountable. If a politician can back corporate interests against working people, and then spend millions convincing voters they did the opposite, than the big loser is the progressive agenda.

Many of NAFTA’s opponents remain bitter over the measure’s enactment, particularly as Democrat Bill Clinton led the drive for its passage. Hillary Clinton’s presidential campaign has given these opponents a new opportunity to hold the Clinton Administration accountable for its free trade zealotry, and they will not be deterred by Clinton’s attempt to reinvent her record.

As a San Francisco politician recently said, “Payback is a bitch.” And NAFTA opponents will not let Hillary Clinton forget this.