Clinton, Obama and the “Trust” Factor 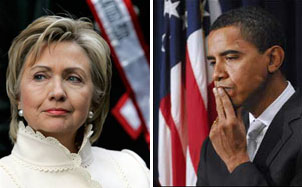 In the presidential campaign, we’ve heard a lot about “experience” (a plus for Hillary Clinton), “change” (Barack Obama’s strongest point), and “electability” (which helps John Edwards.) But one factor that has yet to play a role is “trust.” It is one thing to hear what a candidate has to say, but how can progressives know who will stick to their guns when the right-wing noise machine attacks – and who will capitulate, triangulate and take our support for granted? If “trust” becomes a major concern for Democratic primary voters, Hillary Clinton could be in trouble. And while a candidate can tout their resume to boost “experience,” their platform to project “change,” and good poll numbers to push “electability,” there isn’t much they can do about the fact that voters don’t trust them. Especially when you’ve been in the public eye for 15 years.

Lately, I’ve heard some argue that there is little difference between Clinton and Obama on the issues. They both oppose gay marriage, but support civil unions. They both promise universal health care, but Obama says he’ll do it by the end of his first term and Hillary at the end of her second. They both say they’ll get us out of Iraq, but have been vague about residual forces – and were both wishy-washy on the question of de-funding the War after Congress could not muster enough votes for an actual deadline.

The real difference, however, is on trust. Obama has always been against the War in Iraq since before it started, while Hillary voted for it, refuses to apologize for that vote, and never supported withdrawal until right before the 2006 elections. It’s not enough just to hear what each of the candidates have to say. Where they stood at moments when it was not popular tells you whether you can trust the candidate to stand on principle.

As a progressive, I don’t trust Hillary Clinton because her husband repeatedly betrayed the Left whenever it was convenient. The last Clinton Administration brought us Don’t Ask Don’t Tell, NAFTA, the Defense of Marriage Act, the Telecommunications Act of 1996, the Helms-Burton bill, and Welfare Repeal. Hillary could have shaped her own path as a U.S. Senator, but Iraq has only solidified the mistrust that began in the 1990’s.

Hillary’s top campaign pollster, Mark Penn – who helped engineer Bill Clinton’s anti-progressive campaign in 1996 of triangulation – is the C.E.O. of a union busting firm. And while Hillary loves to say she worked at the Children’s Defense Fund for a year, the vast majority of her legal career included representing Wal-Mart, Tyson Foods and other corporate interests.

But to get the nomination, Obama still has a way to go on the question of trust. As I’ve argued before, Obama is in a better position than Clinton or Edwards to seize the mantle on Iraq because he was always against the War. All other things being equal, primary voters should trust him more on this question. But having been right in 2002 is not enough; Obama needs to set himself apart from Clinton regarding what we do today.

And it looks like Obama is finally getting the message. In a major speech yesterday, he broke from his prior position of waffling on how to get us out of Iraq. “The best way to protect our security,” he said, “and to pressure Iraq’s leaders to resolve their civil war is to immediately begin to remove our combat troops. Not in six months or one year – now. If we start now, all of our combat brigades should be out of Iraq by the end of next year.”

John Edwards has successfully gotten anti-war progressives to trust him on Iraq – even though (like Clinton) he voted for the War in 2002. That’s because he firmly repudiated his prior position, repeatedly apologized, and has taken a more consistent stance on getting out than either of the two major candidates. It’s ironic that Obama, who should have sewed up the progressive vote by now, has actually lost ground because Edwards has given the Left more reason to support him.

In the absence of knowing much about a candidate like Edwards or Obama, trust can go a long way. But when a candidate like Clinton is a known quantity – and has given voters 15 years reasons not to trust her – it will be very difficult to convince them otherwise.
“If Democratic voters pick experience,” said pollster Mark Blumenthal at Yearly Kos, “Hillary Clinton wins. But if they pick trust as the most important issue, she could lose.”

Because Hillary has the advantage on “experience,” her campaign has tried to confront two other issues where she has a perceived weakness – “change” and “electability.” She argues that her 35 years of experience has made her the “most effective agent of change,” and recent poll numbers show that she could beat any Republican nominee.

A slick re-invention campaign can persuade voters who want change that you are that candidate, and Democrats who want to win are swayed by poll results that objectively show you’re electable. But “trust” is a more powerful gut feeling that voters have, and I don’t see what Hillary could do if it becomes a theme in the race.

A recent New York Times poll found that voters – on both the left and the right – don’t trust Hillary. “This wouldn’t be that big a deal if it weren’t for the last seven years,” said columnist Andrew Sullivan. “But we are at war; and we have lost trust – with very good reason – in the leaders of this war. One reason why the current debate about what to do next in Iraq has become so bitter so quickly is precisely because none of us can trust what the government says or its motives.”

Voters think, but first they feel. And before they can objectively conclude that your campaign platform and your experience is worth supporting, they must first have that gut feeling that you are telling them the truth. If Hillary Clinton does not get challenged on “trust” during the primaries, Democrats run the risk of having the Republican nominee attack her on this in the fall. And they will regret it later.