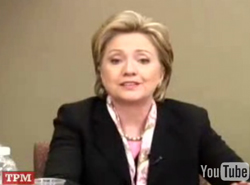 With Barack Obama having secured a majority of pledged delegates, I was hoping to finally focus on the general election race against John McCain. But Hillary Clinton can’t help still making news, and her May 23rd comments that referenced RFK in South Dakota have now sabotaged any chance that she had to be Obama’s running mate. Clinton did not mean to imply that Obama would be assassinated, but her explanation that “the Kennedys have been much on my mind” was insincere – given that she made the very same reference months ago. Even if we take Clinton at her word that she was merely commenting on the length of primary seasons, her comparison with 1968 was not apt – and her characterization of 1992 was patently false. Now that she has put herself out of the running for the Vice Presidency, the super-delegates must ask what purpose her divisive campaign against Obama continues to serve.

After having criticized Hillary Clinton’s campaign tactics in a race where her chances of winning the nomination were slim to none, I finally gave her credit last week for having “toned down the negativity” – a necessary first step for Democrats to come together in the fall and defeat John McCain. But Clinton’s respite was short-lived, as she resumed her slash-and-burn tactics against Obama last Friday.

At a meeting with the editorial board of a Sioux Falls newspaper in South Dakota, Clinton resisted calls to have her drop out of the race with the following statement: “You know, my husband did not wrap up the nomination in 1992 until he won the California primary somewhere in the middle of June, right? We all remember Bobby Kennedy was assassinated in June in California. I don’t understand it.” In other words, said Clinton, anything can still happen in the nomination fight that justifies me staying in the race.

Within hours, Clinton’s statement was condemned in both the mainstream media and the blogs for suggesting that Obama might get shot. Critics said that it was beyond the pale, given that many Obama supporters (especially in the African-American community) have expressed a fear that the Illinois Senator may suffer a similar fate to inspiring leaders like Bobby Kennedy, Martin Luther King or Harvey Milk. It’s why Obama was given Secret Service protection in May 2007 – much earlier than other presidential candidates.

Of course, that’s not what Clinton really meant; her focus was clearly on the length of the primary season and not the assassination, and her campaign has stressed that point. But Clinton then hurt her credibility by issuing an “apology” after the fury – in which she explained her unfortunate choice of words because the Kennedy family has been “much on my mind” lately due to Senator Edward Kennedy’s recent brain tumor.

But Clinton made an almost identical statement two months earlier – long before Ted Kennedy’s brain tumor – where she defended her right to stay in the race because “we all remember the great tragedy of Bobby Kennedy being assassinated in June in L.A.” I’m willing to believe that Clinton meant no ill will towards Obama’s life or health, but to explain it away on this basis is simply untrue. Not to mention that her subsequent “apology” only expressed regret to the Kennedy family – not to Obama or his safety.

Moreover, Clinton’s comparison with the 1992 election – where she said her husband did not wrap up the nomination until “the middle of June” was factually incorrect. First, the last primary that year was in early June (to be precise, June 2nd) – when California and a few other states voted. Second, Bill Clinton effectively sewed up the nomination in early April with the New York primary. Third, comparing this year’s schedule with 1992 (or 1968) is not apt – because the primary season has never started so early.

In other words, Hillary Clinton is grasping at straws to justify her staying in the race – and made a horrific statement that (intentionally or not) brought out the worst fears in this year’s presidential contest. It only justified the perception that she will do anything to get elected, and has inflamed divisions at a time when Obama and Clinton supporters need to come together to win the presidency in November.

At a time when even Clinton’s staunchest supporters have concluded that she will not be the nominee, some have endeavored to bring the party together by pushing a joint ticket. Senator Dianne Feinstein, for example, has openly said that Obama should offer Clinton the vice presidency. But after Clinton’s comments in South Dakota, who could possibly blame Obama for refusing to entertain that option? Knowing now that we will not see an Obama-Clinton ticket, what purpose does her presidential campaign continue to serve?

There used to be a time when Clinton would win primary contests for the right reasons. Her New Hampshire victory in January was a triumph for women’s rights – after voters rebelled against the media’s sexist attacks. But then Clinton started winning for the wrong reasons. She won the popular vote in Ohio and Texas because of irrational fears of terrorism – and lies about NAFTA. She won Pennsylvania in part because Jeremiah Wright dominated the race, and she won Kentucky and West Virginia because of racism.

Now we’re left in this race with hypothetical discussions about whether Obama could be assassinated, and historical comparisons with Bobby Kennedy in 1968. Enough of these distractions – it’s time to move on to the general election where Obama will face John McCain.