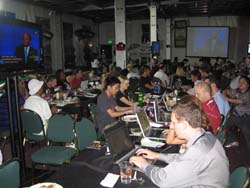 There was much praise for ex-President Bill Clinton’s speech last night at the Democratic National Convention, which will hopefully end the speculation about “bitter” Hillary supporters that has plagued this week’s media coverage. Senator Joe Biden’s forceful attacks on McCain were likewise well received – and Barack Obama’s visit at the end was a pleasant surprise (except for us bloggers in the Big Tent, who knew minutes before that it would happen.) But the Unsung Hero of last night’s Convention was Senator John Kerry – the 2004 Democratic nominee who gave a passionate critique of McCain, with a fire and clarity that was missing with the other speakers. But the major networks didn’t cover it live. At the Big Tent, I had a hard time hearing it – as bloggers milled about in conversation, in sharp contrast to complete silence during the Clinton or Biden speeches. Markos Moulitsas told me he felt Kerry gave the best speech of the night, and it appears that others agree. But like Brian Schweitzer’s speech on Tuesday, this will be another example of a great speech – overshadowed by more prominent and anticipated speakers.