Climate Crisis: Do The Math 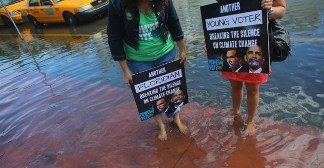 The night after the election, my climate-crisis activism group, 350.org, launched a 21-city tour of the country designed to pressure not politicians but the fossil fuel industry. That should give you some sense of how I weigh the outcome of the 2012 presidential race. Even with Barack Obama safely returned, we can expect only incremental progress—nothing at all on the scale necessary to cope with a world spinning out of control. After all, in the warmest year in U.S. history, amidst a remarkable drought, with the Arctic melting and superstorm Sandy slamming into the coast, global warming came up at only one major campaign event—when Mitt Romney mocked the idea at the GOP’s convention.

Though we need to make progress in D.C., that seems unlikely to happen if we simply keep appealing to the same politicians. At this point it’s clear that Congress acts as the customer service arm of the fossil fuel industry—you call them up and they put you on hold. It’s time we hang up and go try to put some pressure on the guys who own the store: the Exxons of the world. That’s why 350.org’s Do the Math tour, which concludes on Dec. 3 in Utah, is working to spark a student movement that demands colleges and universities divest from fossil fuel stocks, engages in civil disobedience outside shareholder meetings, and in general does what it can to disrupt the fossil fuel industry. If we can make it clear to people that the industry has gone rogue, then we’ll make it easier for our champions in Washington (and Beijing and every other capital) to get something done.

In the meantime, there’s one thing we desperately need the new Obama administration to do: Stop giving presents to the fossil fuel industry. In the last year the government has opened up a huge swath of Montana and Wyoming’s Powder River Basin to coal mining and let Shell into the Arctic. If we’re ever going to stop climate change, we need to leave lots of carbon in the ground.

The purest test for the president will be the Keystone XL Pipeline. Last November he delayed for one year the question of whether to license the 1,179-mile extension, and now he must decide. In those 12 months we’ve seen rampant evidence of the climate crisis. And we’ve also seen Canadian activists block another pipeline, Northern Gateway’s proposed path to the Pacific. Obama will do more than any other single person to decide how much carbon actually stays in the ground.

That’s why we hope people across the country will come out and demonstrate with us to show that we still care very deeply about Keystone.

This piece first appeared in inthesetimes.org