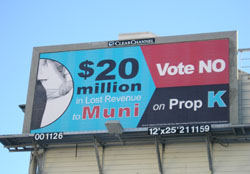 It’s no surprise that a billboard company would launch an ad blitz against Proposition K – a November ballot measure to oppose new advertising on public property. But with the public barely tuning into this year’s election, Clear Channel had to come up with creative ways to scare voters into opposing it. Because attention has shifted to Muni Reform, the billboard company has claimed that the cash-starved transit agency would lose $20 million if Prop K passes. But Prop K is a non-binding policy statement, so its passage would not kill the M.T.A.’s contract with Clear Channel to advertise on bus shelters. Even if it did, the contract would not bring $20 million a year to Muni as Clear Channel’s campaign implies. Voters who want to get Muni out of financial straits can support Proposition A – a Charter Amendment that will bring $26 million a year through the City’s parking revenue. But contrary to threats by the large billboard company, making a statement against visual pollution is not “anti-Muni.”

Supervisor Jake McGoldrick has raised concerns about selling out our public space to large private companies – and has authored Proposition K, which has the support of San Francisco Beautiful and a majority of the Board of Supervisors. Prop K would declare that it is the intent of the voters not to have “an increase in the number of general advertising signs on street furniture,” but unlike an ordinance is merely advisory. Which means that if Prop K passes, it would have no legal effect.

Nevertheless, Clear Channel is now scaring voters into thinking that Prop K would mean less revenue for Muni. On billboards throughout the City, the company has paid for – or at least we assume they paid for them – billboards that show empty pockets with the dire warning “Vote No on K: $20 Million in Lost Revenue for Muni.”

Even if it were a legitimate threat, the numbers are not accurate. Under the proposed contract, Clear Channel will give the M.T.A. a one-time payment of $5 million to have the right to advertise on bus shelters. Beyond additional payments that total less than $1 million a year, the billboard company will also then pay Muni a minimum annual lease depending on how well the advertising revenue goes.

Under the most generous projections, Muni would get a little over $10 million a year for the Clear Channel contract. If the bus shelters are less profitable and do not rake in the advertisers, Muni would only get about $7 million. The real winner of the contract is not Muni, but Clear Channel – who stands to keep about half the advertising revenue for its own profits.

Granted, Muni needs money – but is letting a conglomerate billboard company reap the benefits worth the small amount of additional revenue? As the Bay Guardian turned 41 last week, the progressive newspaper devoted their entire issue to the perils of privatization – and how government contracts with private companies to provide basic services don’t really save taxpayer dollars. They only make it harder to avoid corruption.

Fortunately, voters who want to help Muni get its fiscal house in order have other options than supporting an advertising contract with Clear Channel. Proposition A would net the transit agency an extra $26 million a year in revenue – by devoting a larger portion of the parking money towards Muni. This is a good example of how we can bring more money for public transportation without selling out to private companies.

Other funding options for Muni that should be on the table for future elections is a parking tax (which failed last year after there was no grassroots campaign to help it pass), a state law to allow San Francisco to restore the pre-2003 vehicle license fee, and a downtown assessment district for property owners who benefit the most from Muni. There are other ways to raise money for Muni – without relying upon the mercy of Clear Channel.

Meanwhile, Prop K is an important statement that San Francisco voters can make against outdoor advertising. We already banned new billboards on private property in 2002, and Prop K extends this to public property like bus shelters and kiosks. While San Francisco has languished in dealing with basic enforcement of anti-billboard laws, other cities – like Sao Paolo, Brazil – have made progress in combating visual pollution.