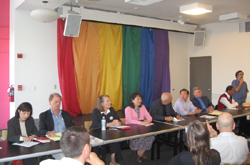 David Chiu was a main target at the District 3 Supervisor Candidate’s Debate sponsored by the Harvey Milk Club on July 1st, as the crowd sighed when he wouldn’t reveal his choice for DCCC Chair. But Claudine Cheng’s refusal to endorse Board President Aaron Peskin’s revenue measures on the November ballot was the far greater story – as the City faces a revenue problem that cries out the need for Downtown to pay its fair share. Real estate interests have funded Cheng’s campaign coffers in filing statements now available – making it clear that she will be their candidate when many of them work to defeat an increase in the real estate transfer tax in November. As the City struggles with a budget that’s the product of Sacramento refusing to raise taxes, supporting revenue measures needs to be a basic litmus test for local candidates.

The Harvey Milk Club LGBT Democratic Club invited all candidates vying to replace Supervisor Aaron Peskin when he gets termed out – and to provide some context, asked Peskin to explain what the stakes are. “Back in 2000,” he said, “the streets were paved with gold and our friends were being kicked out of this town.” Peskin spoke about what the Board has accomplished in the last eight years, and how crucial November’s election will be. And he concluded his remarks by saying he hoped the next District 3 Supervisor will be “progressive on housing measures” and “progressive on revenue measures.”

It’s on this latter point where, more than any other Supervisor, Aaron Peskin has taken the lead. In 2002, he sponsored a ballot measure to raise the City’s real estate transfer tax – only to have it fail because there was no grass-roots effort to counter attacks from Downtown. He also championed a gross receipts tax restoration in 2004, which failed for similar reasons. This November, with the City budget situation threatening to slash health and human services, Peskin has authored propositions to (a) raise the real estate transfer tax and (b) close the business tax loophole on partnerships.

Just like Chris Daly’s successor will have to be a strong advocate for tenants’ rights, Aaron Peskin’s replacement must be committed to progressive revenue solutions.

And most of the candidates said they supported Peskin’s revenue measures – except Claudine Cheng who was non-committal. “I’m very concerned about the economic environment for small businesses,” she said. Never mind that the City’s real estate transfer tax is less than one percent, is one of the most progressive forms of taxation and primarily affects speculators who want to “flip” properties. Never mind that the increase would only affect properties worth more than $2 million, and property owners could get an exemption if they agree to seismically retrofit their building or install solar panels.

Claudine Cheng’s reluctance may be because her campaign is funded by many of the real estate interests who would pay the transfer tax – and real estate law partnerships who benefit from the current loophole in the business tax. New campaign finance reports won’t be available until later this month, but Cheng’s semi-annual report from late last year (which proved who has given her early “seed money”) shows a pretty obvious pattern of who her donors are.

One is developer Anthony Chan of Wealth Properties, Inc. – who gave Cheng the maximum legal contribution of $500, which was matched by his wife Ellen. Chan owns commercial property in the Financial District, and was Willie Brown’s landlord until the Mayor sold his law practice (and later rented him campaign office space.) According to an old SF Weekly article, Chan has used political donations to help his real estate investments – which included property near the BART to SFO extension.

This is only a fraction of Cheng’s real estate donations – as Ethics Commission reports only show contributions made before the end of December. When her semi-annual filing becomes due later this month, we’ll see how many more are funding her campaign. But it is still noteworthy to see how many of them gave the maximum legal contribution of $500 nearly a year before District 3 voters will get to weigh in, and at a time when even most donors aren’t yet paying attention.

Cheng’s position on the revenue measures did not generate much reaction from the Milk Club crowd – as the audience responded more to David Chiu’s reluctance to take a stand in the race for DCCC Chair between Scott Wiener and Aaron Peskin. That will be an important vote when the local Democratic Party picks a new chair in a few weeks. But when it comes to basic bread-and-butter questions about our City’s future, supporting Peskin’s revenue measures is far more important down the road.

EDITOR’S NOTE: Two candidates, Joe Alioto Jr. and Lynn Jefferson, did not attend the Milk Club candidate’s forum — and where they stand on the revenue measures is unknown.