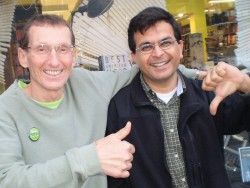 I stood among passersby in the graying dusk on the sidewalk in front of Booksmith at 1644 Haight waiting to photograph for a Prop L story two Haight Ashbury Improvement Association members, Praveen Madan, bookstore owner, and Ted Loewenberg, Haight Ashbury Improvement Association President. As Praveen emerged from the store, I was blindsided by an ruddy-faced buzz-cut with arms outspread. “Hello, Mama. Can I have a hug? Got a few cents?” Protected by his desperate eyes and Praveen’s presence, I was swallowed in a bear-hug. “I don’t have money,” I said in his ear. He smiled. “God bless you.” He crossed through traffic to a seated group. “He was unusually aggressive,” Praveen remarked. “You don’t see that much.” Later, I found out he was new to San Francisco, naïve and scared.

Ted perched amicably next to Praveen for the pictures. A collegial thumbs-up, thumbs-down was their idea. Praveen nodded across Haight toward the traveler cluster. “Photograph them.” I did. The hugger and his buddy thumbed from Ohio seeking work. Lost in the City, they asked where they could shower. They felt miserably dirty.

I walked east to Distractions, Jimmy Siegel’s store, then to Masonic to interview Jim Preston, co-owner of Positively Haight Street who told me he has a respectful relationship with travelers and homeless people outside his store. They work with him to keep the place clean.

I was gathering opinions about the politics behind Prop L from four business owners in the eye of the sit-lie Civil Sidewalks storm.

Ted Loewenberg, Haight Ashbury Improvement Association President and his wife, a teacher, run Harper House, a Victorian Bed and Breakfast catering short-term to UCSF medical students, professors, and researchers from around the world.

In spring 2009, Ted heard stories of escalating violence. A twenty-something guy panhandled a mother pushing a stroller near Haight Street Market. “Not today,” she responded. He spat on her son.

The former Daljeet store security camera captured two ugly fights. “A dirty street kid,” hanging with friends, angered at being hosed away nightly by a 40-ish man living with his girlfriend in an upstairs apartment, dove at the man’s legs and, “tried to take him down.” The girlfriend’s e-mail stated, he attempted to “claw my boyfriend’s eyes out and bite him.” Police were called, but the released attacker and friends returned, apparently threatening the man with a knife. The couple moved.

For an ‘expert’s’ description of homeless people and policy, Ted directed me to Heather Mac Donald’s October 2010 ‘City Journal’ story, “The Sidewalks of San Francisco,” “a 7,000-word “really good read…somebody doing the leg work of identifying who’s there.”

From the right-wing conservative think tank, Manhattan Institute For Policy Research, Mac Donald writes, “The sidewalks of the Haight-Ashbury district have been colonized by aggressive, migratory youths who travel up and down the West Coast panhandling for drug and booze money.”

Ted augments this identification with his own ‘Mad Max Thunderdome’ persona.

The core group of troublemakers hang with pit bulls at Cole and Haight.

Four to eight at once block sidewalks. “Ask them to move, and you get nasty lip — obscenities — not like the normal panhandlers (who say), ‘I didn’t mean to get in your way. Have a good day.’”

Ted insists Civil Sidewalks, Prop L is about behavior, not particular people, whether they’re homeless or not. His precise description, however, pictures this specific ‘Thunderdome’ group, not the criminalized act of simply sitting down.

Writes Mac Donald, “Homeless, Inc. is trying to portray these voluntary vagabonds as the latest victims of inadequate government housing programs, hoping to defeat an ordinance against sitting and lying on public sidewalks that the Haight community has generated.”

For fairness and balance, I phoned the Coalition on Homelessness to reference ‘Homeless, Inc,” “Best I can tell, she means me,” Bob Offer-Westort said — her only interview “on our side.” “By inventing this fictitious ‘Homeless, Inc,’ she could attack that rather than having to deal with actual things I said which weren’t very useful to her.”

According to Offer-Westort, at a meeting with the Coalition at 850 Bryant, Police Chief George Gascon confided he knew a sit-lie law was unnecessary, but he was duty-bound to promote it in response to Haight Ashbury business owner pressure.”

Ted asserts, “I’m confident if people get the message our community cares about the way people conduct themselves in public places — be it the sidewalk, the park – that will help demagnetize San Francisco being such an attraction to people who think this is somehow a place where anything goes and maybe there are no consequences to any actions they do.”

“Are you hoping that this will keep those people from coming to San Francisco?”

“I think they will get the message, yes.”

I stood in Distractions craning my neck at Jimmy Siegel stretching up on his ladder peeling a poster from the ceiling. On every shelf, display case and shiny surface of his jam-packed store are neatly displayed posters, banners, silk shirts, Rumi albums and buttons saying, “Practice Random Kindness and Senseless Acts of Beauty,” or “I used to be an artist, but I couldn’t handle the starving part,” or “Keep it Simple. I’m kinda stoned.”

Once he lowered his thin frame from the dizzying heights at the top of his store, Jimmy was as direct and honest on San Francisco’s Sit-Lie Prop L as he was energetic.

Jimmy Siegel grew up poor in the Haight. As a young man, he was briefly homeless and slept in Golden Gate Park. He has operated Distractions for 34 years. Now a multi-millionaire, he owns seven buildings and his Alamo Square home.

“It was a bad slum when I grew up here and started this store. In the ’70s, before I opened, everything was boarded up except for liquor stores. There was a lot of crime. I paved the way. I was one of the first stores open. There wasn’t much here.”

He reports that, with the help of the banks, police, and the Chronicle, real estate and big business interests have for years encouraged Haight gentrification to raise property values and make more money. These are the forces behind the sit-lie proposal. “They want the poor people, low income people, hippies out.’ Instead of million-and-a-half, they want three million dollar houses.”

“There is big money — two hundred thousand dollars behind this sit-lie L campaign. I think realtor groups gave to it. I own my own home. I’m a member of Small Property Owners. They send out a monthly newsletter, and they have big on there, ‘Yes on L and No on M.’ Landlord groups, property owners’ groups — gentrification!

“I worked with Matt Gonzalez to make the anti-chain store law so you can’t put chain stores up here on Haight Street. I want to keep Haight Street funky and low rent so artists, families and people can afford to be here. They want to gentrify it so it’s chain stores serving the upper class. Very few stores are independently owned on Haight Street anymore. Most of it is corporate these days.”

To keep San Francisco the open and accepting society he loves and to draw tourists who travel far to see this unique place, he encourages street musicians on Haight. Though he feels San Francisco is still wonderful, encroaching gentrification robs the City of its former sparkle.

Two years ago, San Francisco Mayor Gavin Newsom and Supervisors signed a certificate designating Praveen Madan, Christin Evans and their Booksmith Bookstore the “Treasure of the Neighborhood.” Ted Loewenberg, HAIA President, presented the award recognizing the community service Booksmith provides. In three years, they have strengthened the link between the book store and The Haight, building “a politically neutral place where people of all beliefs” “come together for dialogue, conversation, discussion.”

Praveen is proud that through their event program, Booksmith has created “a community-serving institution that people are proud of and patronize irrespective of their political beliefs.”

I asked, “What about you and Christin motivates you to stand back, see homelessness objectively, and convene people in public discourse?

Trained as an engineer with a Masters in Business, Praveen worked for years as a consultant to large companies. “The profession trains you to be rigorous, analytical, and objective,” he said. You can’t come in emotionally charged about your beliefs. You must study issues and gather data, employing a balanced approach. “Your credibility is tied to how fact-based you are.”

For example, “The claim has been that the police need another tool. The existing tools they have are not enough.

“There are two dozen quality of life laws on the books. Just about anything these people can do is already illegal. They can’t drink or pee in public. They can’t be seen camping (or) aggressively block a sidewalk, harassing a pedestrian, panhandling within so many feet of an ATM machine, and on and on.

“Then, there’s real criminal laws about actual assault, or theft, or burglary.

“There are (an estimated) 6,000 homeless people in San Francisco, most harmless. The consistent troublemakers, repeat offenders, who engage in threatening, aggressive behaviors is about 150 people.”

For 150 people, the SFPD has over 2,300 police officers, 850 patrol cars; The District Attorneys Office has 200 trained attorneys.

“We have an army. Insisting we need one more fighter jet to win the Afghan war is so ludicrous any rational person looking at the claim must laugh.”

Praveen’s consulting reputation as a consultant was also based on how he brought people together to help them create change in their organizations. “People in companies have different ideas on what needs to be done and how. They argue and fight. Decisions get made. It’s not perfect. But, the process of getting people together to make decisions does work.”

The October 9 Civil Sidewalks rally was a case in point. They wouldn’t allow Praveen in.

It was behind FTC skateboard shop in the backyard. The entrance to the alleyway was blocked. They let people in selectively. A man from the PR firm standing there probably knew from Praveen’s own article where he stood on the sit-lie issue. ‘Praveen, you’re not invited,’ he stated. http://www.baycitizen.org/blogs/citizen/whats-wrong-sit-lie-campaigns-story/

Praveen protested, ‘I’m a member of the Haight Ashbury Improvement Association. Ted Loewenberg has been sending e-mails for two weeks about this rally inviting everybody to come.

‘The Mayor is speaking; the police chief is speaking. This is a public event.’

He walked around for ten minutes trying to calm down and figure out how to get in. He returned and said, “I’m a neighbor. I have a business here. I live here. I just want to hear what these people have to say. I promise I won’t make trouble.’

They let him in. A man came and hovered around, making sure he didn’t heckle anybody or ask questions.

The rally was beautifully orchestrated, stage managed right down to every last detail to create that illusion that all normal, reasonable, respectable people are behind this, he reported.

The people running the other side, the No on Sit Lie, Prop L had a table on the sidewalk with two people sitting there passing out literature. There was no discussion between these two completely separate groups.

DEMOCRACY AND CONSENSUS: THE PROCESS IS THE SOLUTION

Since his article came out, people ask Praveen, “What do you think the solution is?’

“It’s actually counterproductive for any one party to come up and push with an idea or a solution.” The process is more important than the solution.

“If all stakeholders in the community are not at the table, you’re not following the right process, and you will not come up with the right solution. That’s one thing that’s wrong with Civil Sidewalks campaign.”