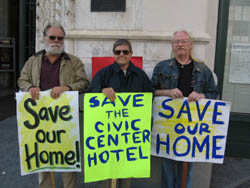 Civic Center Hotel residents turned in tenant petitions to the Rent Stabilization and Arbitration Board last week due to the Plumbers’ Union refusal to seismic retrofit the Civic Center Hotel. City law requires completion of the retrofit, which would make the building safe in case of an earthquake, by February 15, 2006. As this deadline rapidly approaches, the Plumbers’ Union has still not applied for a permit for the work. This action, or rather lack of action, resulted in the Department of Building Inspection sending the Plumbers’ Union’s violation to the City Attorney’s office in October 2005. If the city successfully sues the Plumbers Union would be fined $500 a day until the work is complete.

The Plumbers claim they cannot afford to seismic retorfit the building. Not only have they not sought the low-cost loan offered by the city but they are currently under Federal investigation for inverting 36 million dollars to their Clear Lake resort.

As Christopher Dahl handed in the tenant petitions, he explained “the basic problem is that they don’t really care what happens to us. They just want to demolish the hotel, and throw us all out.They are trying to ignore us and hope we go away,”