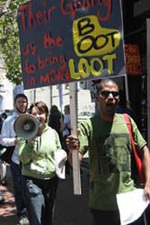 The Land Use and Economic Development Committee considered a resolution Wednesday that urges the Civic Center Hotel’s owner, the U.A. Local 38 Pension Trust Fund, to seismically retrofit it for earthquake preparedness and bring it up to building code.

Preserving the hotel in this way would protect the tenants who live there in terms of their personal safety but would also allow them continued access to affordable housing. The resolution, sponsored by Supervisor Chris Daly, seeks to protect the over 100 tenants who live in the Civic Center Hotel, including disabled persons, students, families and low-income workers.

In 2003, the Pension Trust Fund had attempted to apply to demolish the building, although this application was never completed. The City Attorney’s Office has since filed a lawsuit against the building’s owners requiring that the building be brought up to code. A legislative aide from Supervisor Daly’s office stated “they are basically allowing the building to deteriorate which is unlawful.”

The hotel is currently unequipped with wall sprinklers in the case of fire and it is not earthquake safe. The members of the Pension Trust Fund have not made any definitive steps towards upgrading the building and as recounted by many tenants at the hearing, they have not made themselves available to discuss the matter either.

Around twenty Civic Center Hotel tenants showed up to speak their dismay with the Pension Trust Fund. A reoccurring theme from the tenants was the feeling that their concerns were falling on deaf ears. Tenant Christopher Dahl described how “they basically won’t talk to us,” and spoke to how the Trust Fund would agree only to meet with a single tenant to discuss the issue or with Supervisor Daly alone.

Many tenants portrayed the Civic Center Hotel as a refuge and one of the few places in the city that offered clean, crime-free, and comfortable housing at an affordable price. A serious concern on many minds was where the tenants would relocate. With the city in a crisis as low-income workers and families leave in record numbers, there was little hope felt that anything as reasonably adequate could be found.

Michael Goldstein, of the Harvey Milk Democratic Club, said that if there was a mass eviction from the hotel “Folks will end up on the street or in housing that is worst or much more expensive.” The 156 units in the hotel are subject to rent control.

An attorney for the U.A. Local 38 Pension Trust Fund spoke towards the end. His message was one of moving forward with talks with both the City Attorney’s office and Supervisor Chris Daly. He said that his client was “literally stuck between a rock and a hard place,” trying to navigate between the financially draining choice of retrofitting the building or demolishing it and disturbing the lives of over 100 residents.

The attorney asked for an additional 30 days to engage in these sit-downs with city officials. It appears that with pressure mounting from the resolutions appearance before the Board of Supervisors, the stakeholders are prepared to begin to move forward.

Supervisors Maxwell and McGoldrick agreed to the thirty-day continuation. McGoldrick stated, “The number one goal right now is just to get to the table.” The item is continued for July 26th.