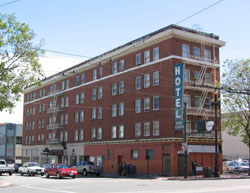 Uncertainty regarding the quality of steel frames in the Civic Center Hotel caused the Land Use Committee Wednesday to continue the resolution until September. Daly’s legislation to preserve the Hotel and keep its tenants living there will be stalled while a structural engineer submits findings to the Department of Building Inspection. The resolution would have the building’s owners seismically retrofit it in order to make it earthquake safe. Over 100 people live at the Civic Center Hotel, including families, children, students and low-income workers.

The resolution has been with the Land Use Committee for months now as the U.A. Local 38 Pension Trust Fund and the resolution’s supporters struggled to engage in dialogue concerning the building’s preservation. In the meantime, the Civic Center Hotel continues to deteriorate and is not being brought up to building code. Currently the hotel is not equipped to handle an earthquake or a fire.

In 2003, the Trust Fund applied to have the building demolished and though the application process was never complete, this action brought grave concern to the over 100 tenants who live there permanently. Many describe the hotel as one of the few safe, clean and comfortable places to live in San Francisco that is still affordable.

For now, the Civic Center Hotel will stay as it is pending the next step in the legislative process.