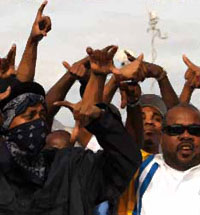 In order to curb youth violence, the city of San Francisco has teamed up with UCSF to develop a violence prevention strategy. Dr. Howard Pinderhughes will be spearheading the project to create both short term and long-term goals. During the Committee on Ending Gun and Gang Violence special meeting on Monday January 30, Dr. Pinderhughes estimated that in six to eight months a plan would be in place.

The plan should encompass strategies for different areas of the city. They will map risk factors for each neighborhood. Dr. Pinderhughes will also lead an evaluation of various city agencies to see which is most effective. “We need to close the data gaps between agencies,” said Dr. Pinderhughes. “We need to take an inventory and see where money is spent successfully.”

The goal is to create both collaboration and cohesion between city agencies, which should create more opportunities for San Francisco’s at risk youth. Since funding is an issue, public and private partnerships will be explored.

Dr. Pinderhughes is a sociologist who specializes in youth race relations and violence. His expertise is needed because from 2004 to 2005 San Francisco Police Department statistics show an increase in juvenile crime—both victims and perpetrators. Mainly in the 17 to 19 age group, however some youth as young as 14 were implicated in homicides.

Captain Kevin Cashman said that many homicides were a result of an argument and called the incidents “spontaneous violence.” Also, there are simply more people carrying more guns, but the focus should be on the youth.

“Kids are reckless,” said Captain Cashman. “That is what we should be most worried about.”

District Attorney Kamala Harris declared that when assessing the gun violence problem in San Francisco, it is vital to remember the ethnic breakdown of those engaged in violent activities. There were 184 homicides from 2004 to 2005, 114 victims were African-American. So, 62 percent of the victims were African-American, but they only make up seven percent of San Francisco’s population.

“There are two main factors to the homicide epidemic,” said District Attorney Harris. “One is gun crime and two is drug crime and they are both intertwined with gangs.”

The District Attorney’s Office has stiffened penalties for both gun and drug possession. Previously both drug distributors and users were receiving the same diversion program, where the offender did not serve time, but was sent to treatment. Now dealers will get a more severe sentence. And, for a misdemeanor gun charge the penalty is now a minimum of 90 days in county jail and the bail was increased.

“We are working hard to change the perception of San Francisco as a safe haven for criminals,” said District Attorney Harris. “We don’t want people coming here to engage in criminal activity.”

“If we had quicker responses to crimes we would have more witnesses,” said District Attorney Harris. “It is a challenge creating trust with the law enforcement and the community.”

District Attorney Harris went on to say that the city needs more police and more attorneys.

Supervisor Ross Mirkarimi stated that San Francisco does not need more police “parachuted” into high crime areas. “There is a reason why the youth is seduced into a lifestyle of crime,” Mirkarimi said.

Bill Siffermann, Chief Probation Officer from the Juvenile Probation Department, stated that they are working to provide youths with more opportunities like job and social skills. The department also holds group meetings in various communities where speakers come to offer hope to adolescents on probation.

Chairwoman Sophie Maxwell was very pleased to hear of the meetings. She proposed that this program continue and expand. Supervisor Mirkarimi and Chairwoman Maxwell agreed that these meetings could be held at some of the soon-to-be vacant schools that are scheduled to close, due to lack of funds.