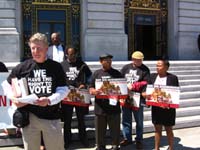 Opponents of the Bayview Redevelopment Plan – who last year gathered 33,000 signatures to challenge it at the ballot box – yesterday filed for a court injunction to get the City to validate the signatures. Last September, City Attorney Dennis Herrera issued an opinion that the signatures were invalid because the petitions did not include all 500 pages of the Plan. If upheld, Herrera’s opinion would effectively eviscerate the right to challenge any law by referendum – as no petition-gatherer can be reasonably expected to carry the equivalent of two phonebooks.

Now, under the auspices of keeping the 49ers in San Francisco, Redevelopment plans to give away a large portion of Bayview-Hunters Point to the Lennar Corporation. Yesterday, the Board of Supervisors Land Use Committee reviewed a plan for the area – with a new football stadium, biotech businesses and high-rise condominiums. Because it’s now a Redevelopment area, the Supervisors can’t do anything about it. And when Brian O’Flynn spoke during public comment about the Bayview Referendum that if successful could sink the whole project, Supervisor Sophie Maxwell cut him off and said they weren’t talking about the Redevelopment Plan.

Lennar, a Florida-based real estate corporation, has a bad track record of broken promises when it comes to affordable housing. In Orange County, low-income families who sought to buy an “affordable home” from Lennar were required to make a 50% down payment. In Oakland, Lennar dropped plans to build 850 units of housing downtown because the City might require some of them to be affordable. And in Hunters Point, Lennar broke its promise to build 400 units of rental housing – because the rental market was not “profitable.”

The project released yesterday would have Lennar redevelop all of Candlestick Point (where the 49ers stadium is currently located) and the Hunters Point Shipyard. A new stadium would be built at Hunters Point Shipyard, and 8,500 homes would be built at both Candlestick Point and the Shipyard – including some high-rise towers. There would be 300 acres of open space, 80,000 square feet of retail, and 150,000 square feet of office space. According to Kofi Bonner of Lennar, the retail would include stores like Bed Bath & Beyond and the office space would include some light industry and biotech.

More controversially, the plan would demolish the Alice Griffith Housing Project – but with “no resident displacement.” Residents of the public housing complex have been worried about the future, and the Supervisors in recent months have attempted to assuage such concerns. But while the Board passed a non-binding resolution in February supporting the tenants and requesting true affordable replacements, they also endorsed Lennar’s plan to redevelop the project. With Lennar’s track record of broken promises, who’s to say they won’t renege on this one too?

Opponents of Redevelopment have called the new plan a “Trojan Horse” for developers. “The real reason is not to keep the 49ers,” said Brian O’Flynn, “but to push more luxury housing in Hunter’s Point. It’s to allow Lennar to build market-rate housing, and ‘affordable’ housing that won’t be available to most residents. The Yorks [who own the 49ers] don’t even like the proposed location [for the stadium] due to traffic chokeholds.”

At the Hearing, Supervisor Jake McGoldrick injected a healthy dose of skepticism about the project – but couldn’t escape the fact that he can’t control what Redevelopment does. “Why are we using Lennar as a sole-source contract,” he asked Michael Cohen of the Mayor’s Office. “Shouldn’t we at least open this to competitive bidding?”

Cohen’s response to that question was not re-assuring. Lennar has the legal exclusive right to the Hunters Point Shipyard, he said, as they were selected in a process back in 1999 – when Hunters Point (but not the rest of the area) was already a Redevelopment Area. “To combine these two projects – address the 49ers concern, and keep up the promise to plan in the Candlestick Point area – Lennar has to be a part of the process.”

McGoldrick asked Kofi Bonner of Lennar if they have a “Plan B” if the 49ers leave the City. Bonner unconvincingly replied that they “hadn’t been thinking” about it, although – as we reported in February – there’s no way that the 49ers will build at the Shipyard. Lennar won’t admit this fact because, while the entire project has been packaged as an effort to keep the 49ers in town, the real motivation is for Lennar to make a fortune.

McGoldrick’s questions needed to be asked, and if answered truthfully would have exposed the ruse that is this project. But the problem is that the fix is already in. Last May, the Board of Supervisors voted 7-4 to make all of Bayview-Hunters Point a Redevelopment Area – which means they can’t control who gets the lucrative contracts or what kind of development gets built.

Which brings us back to the Referendum campaign – which if successful would get rid of Redevelopment in Bayview-Hunters Point, allowing Jake McGoldrick and others real oversight in the area. Brian O’Flynn spoke during public comment about the referendum campaign, and how it could prevent the “powers-that-be from transferring control of the community to the Lennar Corporation.”

But Sophie Maxwell interrupted him and wouldn’t let him finish. “This is not about the Redevelopment Plan,” she said sternly. “This is about the Stadium Plan.” First, I have never seen a Supervisor so rudely cut off a speaker during a hearing – where members of the public are generally allowed three minutes to comment. Second, the Stadium Plan wouldn’t exist without the Redevelopment Plan – so it was perfectly legitimate.

At a press conference before the Hearing, advocates for the Bayview Referendum announced that they had filed for injunctive relief on behalf of the 33,000 San Franciscans who had signed the petition to put the Redevelopment Plan on the ballot. “What is at stake here,” said O’Flynn, “is not just the right of Bayview people to self-determination. But also the entire right of the referendum.”

If the court approves the injunction, San Francisco voters will finally get to weigh in on this contentious issue.